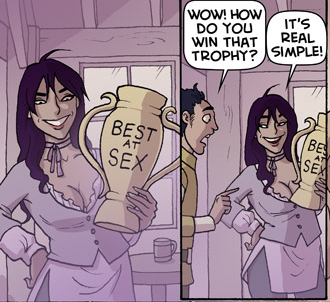 A character possesses In-Universe extraordinary prowess in both scoring and giving physical sexual pleasure to their partner(s). A soft caress on the cheek from such a person can leave the subject a flustered bundle of sexual excitement, a body massage under their hands would be a heavenly experience, while the luckier ones who get to bed this character would most probably be in for the most intensely multi-orgasmic night they've ever had in their lives.

The reasons behind said prowess varies. Sometimes it's simply due to knowing "how to touch them right", sometimes it's through special sex techniques, sometimes it's by knowing how to make the best out of a larger than average tool, sometimes it's stamina, sometimes it might be actual magic, and sometimes, it's simply being a vampire. The Power Perversion Potential for this ability should be very obvious, assuming that it isn't itself a result of Power Perversion Potential. This an almost mandatory part of a Horny Devil's inventory of abilities. Many pornographic works tend to depict their male characters as this; for live-action ones, this would be an Informed Ability, given that they don't actually do anything "special" on-screen.

Note: This trope is neither tied to a specific gender nor tied to a specific sexual orientation. Also, being able to do one or two "tricks" to get one's partner to hit the O-zone does not qualify for this trope. The character is supposed to be (hailed as) a veritable expert in carnal delights, not a "one-trick pony".

May serve as a justification for the attractiveness behind the Chick Magnet, the Head-Turning Beauty, the Pornomancer, or the Kavorka Man.

Not to be confused with an actual deity of sexual activity, though due to their particular domain, they often are Sex Gods by necessity.

Compare with The Casanova and especially The Pornomancer, who both excel in sexual prowess and seduction rather than giving sexual pleasure alone. Though being a consistently successful and sought after lover would usually entail being a Sex God, too.