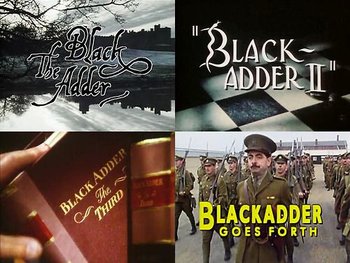 An entire series that follows on chronologically from the predecessor. Usually marked by a change in cast within the universe, while maintaining the same general rules.

Like anything having to do with TV production, this trope has a dark side. Under U.S law, and possibly a few other countries, if a television series runs over a certain number of episodes then the cast are entitled to a percentage of the show's take, in addition to their normal salaries. However, it doesn't take more than some minor rebranding to have a show's new season be legally considered a completely different property. Conversely, any Anime series that continues after concluding its initial premise usually changes its name in this manner when it gets Un-Cancelled.

Officially distinct fromnote yet still a Sub-Trope of Spin-Off in that a Sequel Series occurs (somewhat) immediately after the prior series and in the same general area. When a show continues as normal but renames itself for the new season, it's New Season, New Name, though oftentimes the two overlap. After Show is a subtrope where at least one vital member of the cast is absent. When a series continuesnote usually with the same characters, but not actors, but several elements/rules are updated for modern tastes, you have a Revival. See also: Series Franchise, where the follow-up has the same series name but only a few of the same elements. Sequel Series could be taken as an converse of Canon Welding in that the Sequel Series is pre-welded to its predecessor yet is legally distinct. If a series cannot follow its inspiration legally yet does so in spirit, you have a Spiritual Successor.