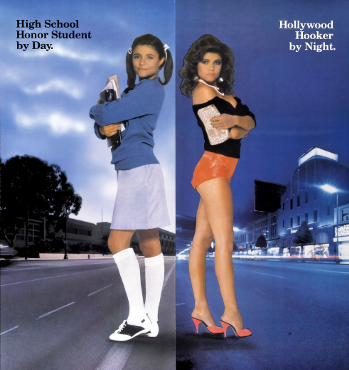 She seems to be the perfect, wholesome teenage girl of The '50s. By day, she's a sweet, innocent ultra-virgin who dresses in knee-length skirts and tasteful sweaters, and repeatedly says things like "that's swell!" and "peachy keen!". She might wear glasses, attend Catholic school, or even be a Preacher's Kid. Her parents and teachers talk about what a "good girl" she is, but all the kids at school (except for the "squares", of course) know about her "reputation". By night, she drinks, smokes, and hangs out with (gasp!) boys. She "parks" with them, while the car radio plays Nothing but Hits, and may even have experienced sexual intercourse. (And if she is still a virgin, she may only be one in the technical sense.) In other words, she's either something of a Hot Hypocrite or at the very least something rather different from what she appears to be. After all, she doesn't want to be a "square" and the male hero needs a girlfriend that appears respectable but isn't a prude. Bonus points if her mother or grandmother was a flapper, teaching their daughters and granddaughters the way of sly rebellion and liberation.

She could be seen as a subversion of the ultra wholesomeness stereotypically associated with the Fifties, but it's more likely just an example of Truth in Television (more or less). Among adults, there were large differences in premarital sex rates after the pill was introduced in 1961, a moment often held to have heralded the start of the sexual revolution. At the same time, however, the Teen Pregnancy rate peaked in 1957 and has, barring a short-lived rebound in the late '80s, fallen consistently

ever since. Despite this, by the 1970s, the '50s were often just treated as the present in regard to sexual behavior, except with far more hypocrisy. Perhaps it's just the fact that the whole franchise of Fifties nostalgia films about the sex lives of teens couldn't possibly exist without her. She is a perfect combination of the nostalgic '50s charm and 1970s priorities. It is no coincidence when this trope became popular. And, of course, this type of ersatz "good girl" can still be found (or suspected) in more culturally or religiously conservative environments even in the present day.

A variant of Naughty by Night, and Sub-Trope of Living a Double Life. See Hot Librarian for her more adult (and less intentionally sexy) counterpart. Contrast with the sexy-on-the-outside, innocent-on-the-inside Hooker with a Heart of Gold.