Sealed Good in a Can 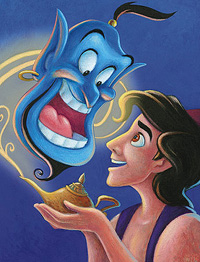 Phenomenal, Cosmic Powers! ...itty-bitty living space.
"By now I will have been dead for many thousands of your years. Embedded in the crystals before you is the total accumulation of all literature and scientific fact of dozens of other worlds spanning the twenty-eight known galaxies. There are many questions to be asked. Here, in this Fortress of Solitude, we will try to find the answers together. So, my son, Kal-El: speak."
— Jor-El, Superman: The Movie
Advertisement:

The complete opposite of Sealed Evil in a Can. This entity is usually kind and gentle, and usually (if not always) rewards the one who releases it, if it can. In other cases, the wandering band of travelers are desperately trying to evade capture or being killed by the forces of darkness. They stumble upon the entity and, thanks to a can-opener (which can range from a trinket to a sacrifice), the only thing that can stop the great evil awakens, and prepares to open a can... of whoop-ass. Sometimes it's revealed that there is a baddie in there with them and they were the Barrier Maiden or the ever-fighting guard keeping them in (Sealed Evil in a Duel). In these cases their release also releases the Sealed Evil in a Can. Oops.

Occasionally used as a more subtle form of Deus ex Machina; may qualify as Holding Back the Phlebotinum, but on some occasions these can be the main hero. See Sealed Inside a Person-Shaped Can for when the Good is imprisoned inside a living being, Sealed Cast in a Multipack for when several characters (good or evil) are canned, or Sealed Badass in a Can for a neutral variant. See Girl in a Box for the usual female version. Compare Fling a Light into the Future. Contrast King in the Mountain, who is usually not let out. May be caused by Supernatural Sealing. See also Awakening the Sleeping Giant, which is where the Good is less "sealed in a can" and more "lazy".