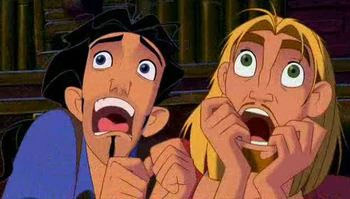 You can just hear it, can't you?
Rose: They're rats! Dozens of rats, vacuum-packed rats.
The Doctor: And you decided to scream.
Mickey: It took me by surprise!
The Doctor: Like a little girl?
Mickey: It was dark, I was covered in rats!
The Doctor: Nine, maybe ten years old. I'm seeing pigtails, frilly skirt...
— Doctor Who, "School Reunion"