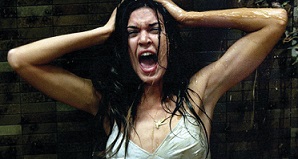 Attempting to pierce the villain's eardrums may not be a useful tactic.
"Scream later! Escape now!"
— Buffy Summers, Buffy the Vampire Slayer
Advertisement:

When a truly terrifying danger rears its ugly head, maybe a monster appears or a large object is about to fall on them, one of the female characters stands there and screams helplessly, necessitating that one of the heroes pull her out of harm's way. Or she dies. Is guaranteed to become even more annoying when said female character sees something dangerous, and stands and screams for the hero to help when they would have had plenty of time to get out of the way themselves. Not necessarily limited to the Damsel in Distress, but can be infuriating if the character is supposed to be a hardened Action Girl.

Contrast with Screaming Warrior (a badass fighter screams to psych himself/herself up and/or cause fear in his/her enemies) and Screams Like a Little Girl (a man who issues a comically high-pitched scream when danger rears its ugly head). Compare Hysterical Woman. Also see Make Me Wanna Shout, when the scream is superpowered and weaponized.

A woman's scream is a powerful auditory bomb: nothing conveys terror quite like it. However, it can easily become Narmful when overused, especially if Stock Screams are used. See Eek, a Mouse!! for one example of something that can trigger this phenomenon. Actresses frequently cast in the role of the Screaming Woman are often called "Scream Queens".