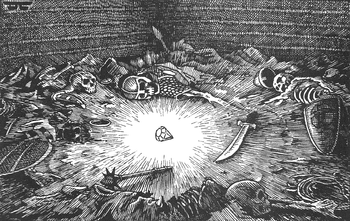 Ah sweet. Free jewel.
If you put a large switch in some cave somewhere, with a sign on it saying 'End-of-the-World Switch. PLEASE DO NOT TOUCH', the paint wouldn't even have time to dry.
— Thief of Time
Advertisement:

This is the description for Schmuck Bait. Do not read this, or else...

You would have to be an idiot to go near schmuck bait. Things like the Big Red Button with the dire warning signs; the dark alley in Vampire Town; the conspicuously untouched treasure chest; the room full of frighteningly realistic statues; the room full of "statues" that twitch every thirty seconds; or a seemingly innocuous game/video telling you to turn the volume up and/or look very closely at an image...

Making schmuck bait irresistible is a good trick. Often it takes advantage of the inherent appeal of Forbidden Fruit. Or a Curious as a Monkey character or a Super Gullible character will ensure it gets taken. Often in spite of warning cries from other characters. It can end badly.

See also Briar Patching, Genre Blindness, Too Dumb to Live, Idiot Ball, Distress Ball, What Does This Button Do?, Press X to Die, Reverse Psychology, Who Would Be Stupid Enough?, The Window or the Stairs, Don't Touch It, You Idiot!, and Tempting Fate. If taking the bait doesn't hurt you, it's a Fake Trap and possibly a Paranoia Gambit. If taking it does something good, it's Violation of Common Sense. If that something good is being able to progress, it's Stupidity Is the Only Option (Trap Is the Only Option for the non-video game version). If someone fell into a Schmuck Bait one day but understandably didn't noise about it, he may be subject to Oblivious Mockeries. Not to be mistaken for something that actually baits your schmuck.Explanation "Schmuck" is Yiddish for Penis.

Note that this term is used differently by screenwriters

. It most commonly refers to Like You Would Really Do It, and can also simply refer to any sort of audience misdirection.

More information on this can be found here.

open/close all folders
Advertising
Arts
Comedy
Fairy Tales
At last the third also came with the like intent, and the others screamed out, "Keep away; for goodness' sake keep away!" But she did not understand why she was to keep away. "The others are there," she thought, "I may as well be there too," and ran to them; but as soon as she had touched her sister, she remained sticking fast to her. So they had to spend the night with the goose.
Fan Works
Gamebooks
Music
Podcasts
Professional Wrestling
Puppet Shows
Roleplay
Theatre
Urban Legends
Visual Novels
Web Animation
Web Videos
Highlight only in case of emergency: Not now, you idiot! I said only in case of emergency!
Feedback

Tex tricks Tucker into turning around so she can knock him out and steal his energy sword by telling him there are hot girls making out behind him. Even knowing that it's almost definitely a trap, he can't resist checking.

Tex tricks Tucker into turning around so she can knock him out and steal his energy sword by telling him there are hot girls making out behind him. Even knowing that it's almost definitely a trap, he can't resist checking.