Scenery Censor
aka: Peek A Boo 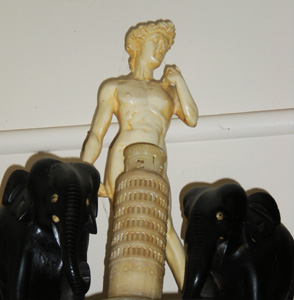 The elephants may be a bit much.
Convenient coverage in just the right spots...
—Suzu Kanade, Ayakashi Triangle
Advertisement:

A completely nude or otherwise exposed character's "naughty bits" are blocked from the camera by a convenient prop or oddity of architecture, yet every other character in the scene gets an eyeful, usually resulting in either ogling and nosebleeds, or Squicks and grabs for the Brain Bleach.

Usually this is used just out of cultural necessity, and/or to hide the fact that the cast members involved weren't really nude in the filming of the scene. However, it can be Played for Laughs due to the increasing absurdity of the covering elements (as seen in the Austin Powers films), and overuse of this trope tends to break the audience's Willing Suspension of Disbelief and effectively become a gag, even when played technically straight. In this case, it's common for conveniently-placed props to double as visual innuendo too.

As seen in some examples below, this trope can also be used to cover gruesome detail (blood, dead bodies, etc) or covering up a brand name or famous figure whose image wasn't cleared with the legal department to be seen.

Bowdlerized is when the original footage is censored to allow normal viewing for a different audience, which contains some overlap with this.

For hidden faces, see The Faceless. For bedtime Scenery Censor techniques, see Modesty Bedsheet. Related to Godiva Hair (where nudity is covered up by long hair) and Hand-or-Object Underwear (where a naked character deliberately covers themselves by holding an object or placing their hands over their private parts). TV shows and movies (be they animated or live action) that use bathing scenes usually rely on Censor Steam or Censor Suds. Careful lighting can be used to create a Censor Shadow. In comics, speech bubbles are very serviceable too, as seen in Speech-Bubble Censoring. For cases in which an actress is pregnant but her character isn't, see Hide Your Pregnancy.