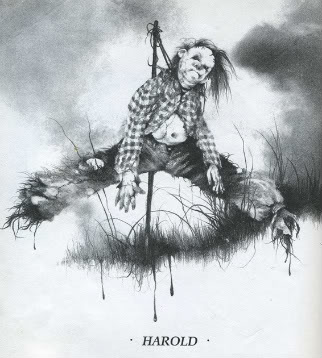 There really is nothing to be afraid of, they told one another. After all, what could a doll do? He's just a sack of straw, it's not possible!
"Where your eyes don't go a filthy scarecrow waves its broomstick arms
And does a parody of each unconscious thing you do
When you turn around to look it's gone behind you
On its face it's wearing your confused expression
Where your eyes don't go."
— They Might Be Giants, Where Your Eyes Don't Go
Advertisement:

Scarecrows do more than scaring crows: humans often aren't fond of them either. The fact that they look like corpses propped up, or the vaguely Christ-like looks, or the fact that they're meant to be human but don't look very human at all. A pumpkin head usually makes a great varnish for that "evil smile" and the desperate need for unnerving, blackened eyes. Expect one to be covered in stitches. As such, scarecrows are brilliant Nightmare Fuel fodder, so fiction is littered with examples of scarecrows, some only scary, some reasonably vengeful, and if luck's out the window the protagonist has to deal with an evil one.

Their humanoid appearance means that having a person looking like a scarecrow, imprisoned, dead, or hiding, gives extra creepiness. Compare Creepy Doll and Sackhead Slasher, where a (usually) live body wears a burlap mask which can make them resemble a scarecrow and draws on similar fears. Japanese scarecrows (kakashi) may sport a henohenomoheji face, which depending on context may be silly or eerie.

That all said, plenty of scarecrows are friendly. It largely depends on the intended audience. For every horror movie featuring killer scarecrows, there's a children's book in which scarecrows are a human's best friend right after dogs. After all, think of a fictional scarecrow and chances are you're thinking of that guy from Land of Oz.

See also Lost in the Maize, the natural environment of scary scarecrows, and Sinister Scythe, their common Weapon of Choice. Other Gardening-Variety Weapons may show up as well, but machinery is relatively rare, possibly because scarecrows have an air of old timey-ness to them. The more supernatural, the more likely they're able to command Creepy Crows or indulge in I Know What You Fear. Kill It with Fire is usually the way to go if a scarecrow needs to be gotten rid of.

Both depictions at once:

The first boss of the game.

The first boss of the game.