Resignations Not Accepted
aka: You Can Never Leave 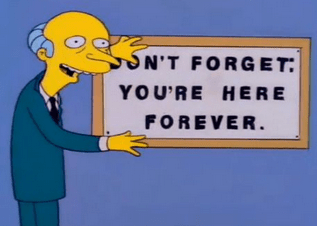 So do it for her.
"Just when I thought I was out... they pull me back in."
— Michael Corleone, The Godfather Part III
Advertisement:

So you've been working as a secret agent, or for The Mafia/The Syndicate, or as an assassin, or for an Evil Overlord and their Evil Empire, or for a Nebulous Evil Organisation/The Conspiracy, or as a health inspector, when you decide it's time for you to retire, defect, or just that they've gone one step too far and you need to Resign in Protest.

Ha! Good luck with that, because once you join a shadowy organization of this sort, you can never leave. If your bosses don't force you to keep working, they'll soon start saying, "He Knows Too Much" and making plans for your elimination. This normally only happens in villainous organizations, so the victim is either a villain or an antihero. Expect Hunting the Rogue or a Contract on the Hitman to follow. If it doesn't, then the author may drop a bridge on you just to prove that crime doesn't pay.

Depending on the genre, one solution is to become a One-Man Army and simply destroy the former organization. One would think that after having half (or even a third or a tenth) of their forces destroyed they'd get the point and just leave him alone, but they never do. The typical route taken is that you fight your way out, but other solutions include killing off your bosses to put the organization in disarray, or faking your own death.

This is different from Unprocessed Resignation, in which the agent would be allowed to retire if the superior would process the necessary paperwork.

A subtrope of In It for Life. See also Mandatory Unretirement, The Perils of Being the Best, and Thrown from the Zeppelin.

Since Big Boy Caprice was played by this trope's page quote originating actor...

Alternative Title(s): You Can Never Leave, No One Leaves Us Alive