Rescued from the Underworld
aka: Orphean Rescue 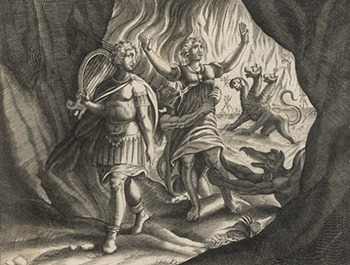 Orpheus in the underworld, rescuing his wife. For a value of "rescue" that includes walking off with a lute.
"Who would fardels bear,
To grunt and sweat under a weary life,
But that the dread of something after death,
The undiscovered country, from whose bourn
No traveller returns, puzzles the will,
And makes us rather bear those ills we have
Than fly to others that we know not of?"
— Hamlet, Hamlet
Advertisement:

A beloved character has been taken someplace beyond mortal ken and reckoning. But thankfully, the land of the dead is a place that can be visited. If the protagonist can brave the journey To Hell and Back, they can free the soul and resurrect them. Success is not guaranteed though.

Sometimes it's not the body that's gone but the mind or soul, which can happen if they are lost in Cyberspace or in a Dream Within a Dream. They may have been trapped in a Lotus-Eater Machine or Psychological Torment Zone, or had their Soul taken into the Spirit World.

There tend to be rules and Leave Your Quest Tests involved in getting into and out of the Spirit World, such as having money for The Ferryman, ways to calm the Hellhounds, and the self discipline to ignore the phantoms trying to make you leave the path. It's also generally a bad idea to eat or drink anything while you're there.

Sub-Trope of To Hell and Back. Compare Escaped from Hell, which need not involve assistance from the outside. If someone dreaming starts to wake up when he realizes that he's not in the real world, he may have found A Glitch in the Matrix. If he is helped to wake up by a character from within the dream, then the Dream Tells You to Wake Up. Contrast Weirdness Search and Rescue when the hero is being helped to escape a weird setting.

This is a Death Trope so expect heavy spoilers.

open/close all folders
Anime and Manga
Comic Books
Fanfiction
Films — Animated
Films — Live-Action
Literature
Live-Action TV
Myths & Religion
Tabletop Games
“You need to understand it wasn’t her fault, alright? You need to understand none of this was her fault, but suicide means something to a Catholic. So I walked down and carried her back. She tried to fight me and run back to it. Can you believe that? She tried to run back to the eating and purging and eating and...”
...
“I’m going to walk back when I get my head together a little and try and find the rest of her, but until then...”
Like he said, she’s got to eat.
Theatre
Video Games
Webcomics
Web Original
Western Animation