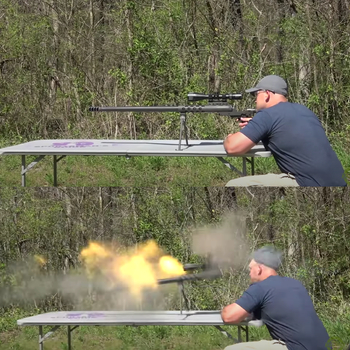 Yikes...
"Be careful. The safety's off, so it could go off for, like, no reason."
— Sterling Archer, Archer
Advertisement:

Evidently, Hollywood doesn't trust the "big brands" when it comes to guns, as there are two things you can usually expect to see with firearms depicted in fiction:

For that matter, Hollywood treats a misfire as being the same as a jam as well. While very rare for modern ammunition made by reliable manufacturers, to the tune of about one-in-a-million or less, ammunition primers occasionally do not work as intended. If a round of ammo fails to fire, nobody in fiction simply pulls the trigger a second time if it's a revolver, or in the case of automatics, manually works the action to clear the dud so they can keep shooting.
Advertisement:
note Note that the recommended practice in the case of a misfire is to keep the weapon pointed in a safe direction for some time: the primer may, in fact, be accidentally slow-burning, and may go off without warning. Of course, if you're fighting for your life, this particular rule goes out the window. Then again, this fits in with the typical Hollywood approach to plans in general.

To a very limited extent, this can be Truth in Television, as it's possible to jam a weapon so severely that serious work is needed to get it back in order,note One such scenario is a "telescoped" or double-feed round, which occurs when a round is fired but the case is structurally unsound. Rather than being pulled from the chamber by the extractor, the extractor rips off the base of the casing. If the action continues to cycle and load a fresh round, the new round ends up stuffed partway inside the baseless case still stuck in the chamber. This frequently results in a hard jam and requires tools and time to clear - plus a safety check of the weapon afterwards to ensure it wasn't compromised if not in active combat. Either way, the weapon will be out of action for at least a few minutes and may require partial disassembly. and every now and then you will hear about gunmakers issuing safety recalls on guns that aren't drop-safe. But that does sort of prove the point about Hollywood's approach: the gun is being recalled because discharging when it's dropped is not considered normal operation in Real Life. Note too that at least in the US all such recalls are voluntary; firearm manufacturers are exempt from the Consumer Product Safety Act.note Automobile, aircraft, boat, and pesticide manufacturers are also exempt from the CPSA, since they all make things that, even when operating correctly, can still easily kill you — remember, that last one is poison.

If the person is really Too Dumb to Live, they may look into the barrel to see why it isn't working. (If you have to be told why this is a bad idea, you should never touch a gun.)

Since this one's so common, it'd be easier to just list especially egregious examples and subversions. Also see Convenient Misfire. See Reckless Gun Usage, Juggling Loaded Guns and I Just Shot Marvin in the Face for when danger is caused by user carelessness or stupidity.