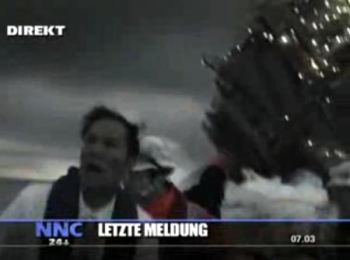 Oil tanker exploding from mysterious causes you say? And I get to cover it? So soon after the unfortunate incident with your wife?
"This is Huxley Prescott reporting live from the scene of an emergency. MIIIIIIIIIIINE!"
Huxley Prescott, Transformers: Rescue Bots - "Rules and Regulations"
Advertisement:

Who is out in 70 mile per hour winds, lashing rains and certain death? It's the Redshirt Reporter. When people need to know about how to get out of a flaming building, who is running through the building? The Redshirt Reporter. They are often seen wearing a rain slicker, amid flying debris, Going for the Big Scoop. Often ends up on Deadline News.

The Redshirt Reporter is the individual who is doing the stand-up, on-the-scene live report from someplace that's so insanely dangerous or unpleasant that anyone with a lick of sense wouldn't be there. However, an attractive reporter is unlikely to be this on account of Big Damn Heroes.

If it's played for comedy, it may be that his boss hates him and is trying to get him killed, or it may be that the reporter is too dumb to realize the danger. In these cases, he usually survives. Played for drama, the reporter is "the best reporter we've got!", and is usually aware of how dangerous it is. This type is also much more likely to end up dead in fiction. A truly legendary reporter is even more likely to get bumped off, for various reasons. It's a trope that was lifted straight from real-life; long before there was television news, reporters were going into (or staying in) dangerous situations in order to get the story.

Related to Deadline News. If it's the "boss is trying to get him killed" version, it overlaps with The Uriah Gambit.

The trope name borrows from the original (1960s) Star Trek, where a newly introduced character (who usually got killed in the opening of that episode), was usually wearing a Red Shirt.