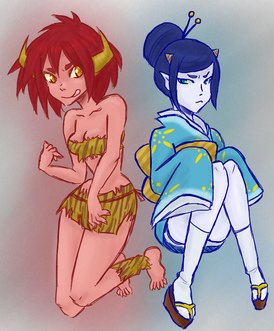 Colour-Coded for Your Convenience!
Image

Detective Somerset: We must divorce ourselves from emotion here. No matter how hard it is, we have to remain focused on the details—
Detective Mills: Hey, man, I feed off my emotions, okay? How's that? [Mills promptly gets into a fight with a reporter snooping around the crime scene] Hey, man, I'm sorry. They just...they piss me off, okay?
Detective Somerset: [sarcastically] It's okay. It's impressive to see a man feeding off his emotions.
— Se7en
Advertisement:

This trope is about two individuals (or occasionally, factions or civilizations) that are significantly linked together somehow (such as through a rivalry, friendship, being siblings, co-workers, competitors, etc.) that have differing personalities and, with it, often different approaches to the world in general, especially whatever they might be competing in/for/over. This, of course, gives them something to butt heads about, since their manner of acting may rub each other the wrong way and each is sure that their way of doing things is right.

By the way, don't get too stuck on the colors in the title. The title refers to a Japanese tradition that gets elaborated a bit later in the article, but it doesn't mean that a character has to dress in or be associated with a particular color in order to fit the role.

Their personalities usually run roughly along the following lines:

While many expressions of this trope play it straight, it is also not uncommon for the Blue Oni and Red Oni to mix traits. The Red Oni, while usually the more passionate and emotion-driven, may also be the more easy-going and flexible of the two. Their more simplistic world-view may make them at least partially immune to angst and Wangst. Conversely, the Blue Oni, while usually stoic and thoughtful, may hide a volatile, angsty nature that may erupt if pushed too far. In such instances the two may switch roles, with the Red Oni becoming the reassuring, composed partner and the Blue Oni becoming a Whirling Dervish of Rage! [Compare pairings such as Red Oni Ken (cocky, arrogant, but decidedly easy-going) and Blue Oni Ryu (stoic, disciplined, but brimming with internal conflict)].

If Elemental Powers are present, you can usually expect the red oni to use Playing with Fire or something of a similarly flashy nature, while the blue oni will prefer Making a Splash or possibly be An Ice Person and an Elemental Rivalry is born.

There are a lot of ways to play their interactions, so sometimes the two are both leads on an equal standing, sometimes the blue is more of The Smart Guy or The Lancer to the red's Hot Blooded The Leader or The Big Guy. The relationship can also vary wildly, as they are just as likely to be close friends as they are to be bitter rivals or enemies. One thing that is sure is that regardless of how big a cast is, when these two are in it, they will be magnetically drawn to each other.

The name comes from traditional Japanese folklore where Oni (think troll/ogre) usually came in two flavors, a Red and a Blue. Over time, it's gotten popular to ascribe different qualities and personalities to the two colors. (Think the high-strung Type A personality and the easy-going Type B personality.) See also the Marid and Ifrits over at Our Genies Are Different.

In a show where it's relevant, differences in fighting style may be something like Technician Versus Performer. For example, a red may rush headlong into combat without focus or a plan, relying on surprise or intimidation. It may be that their strategy is to close the fight quickly before their opponent can think or adapt. It's also possible that they're going to tank their opponent's defenses in order to focus on beating them down. The blue may use cunning traps, stealth and strategies, or tend to win in elegant Single-Stroke Battle fashion, or rely on hitting a target with magical powers or projectiles from a distance instead of running up to their opponent and punching them in the face. Force and Finesse is a variation where red tends to rely on raw power while blue uses precision strikes. Analysis page has more examples of possible red-blue dynamics.

Add one person that bridges the Red Oni and Blue Oni and you got Freudian Trio, with the Red Oni becomes the Id, the Blue Oni becomes Superego, and the connecting person becomes the Ego (or a Blue Oni is the Ego as well, whose either torn between the two, or not involved.). That's the basic formula, but not always. Sometimes as the plot progresses, someone new is added and as they become the trio, this newcomer might be even more emotional than the Red Oni or is even more calm and calculating than the Blue Oni. And whoever keeps the trio together is the ego.

Keep in mind that this trope can apply to anyone and to any pairs of people. They do not have to literally wear red and blue for this trope to work and sometimes, they can even wear opposite colors that contrast their roles as a red or blue Oni. They also do not have to be of the same gender either as this trope can also apply to two people consisting of a boy and a girl.

Energetic and Soft-Spoken Duo is a subtrope. Compare Outside Man, Inside Man, Odd Couple, Cast Calculus (for the evolution of the Red/Blue dynamic through various numbers of ensembles), Tomboy and Girly Girl, Sensitive Guy and Manly Man, and Order Versus Chaos. See also Pink Girl, Blue Boy and Action Duo. If the contrast in personalities between the two actually brings them to blows, you probably have a Tiger Versus Dragon situation. If they are friends it will often be of the Vitriolic Best Buds variety, most commonly where one character is completely oblivious to the vitriol. If race is used to further emphasis these personalities see Salt and Pepper.

Also, despite the name, this trope has nothing to do with that oni.

All example subpages are listed in the red-then-blue order unless otherwise specified:

Same goes for all the other example folders:

The Conductor is the red while DJ Grooves is the blue.

The Conductor is the red while DJ Grooves is the blue.