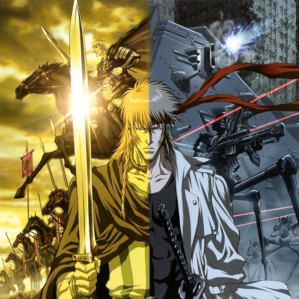 You're as old as the stars themselves and might possess the power to destroy them. While some entities like you might enjoy terrorizing others and warping their minds with improbable non-Euclidean frames, you prefer to be a bit more... subtle in your interactions with humans. Or you might have a good reason for not wanting your powers and potential to be immediately obvious.

And what better way is there to hide your identity and throw off suspicion than by taking on the form of a perky high school student?

An extreme version of Older than They Look, Really 700 Years Old covers ancient, perhaps immortal beings, and (usually) the total opposite of Really Was Born Yesterday. Subjective age only—a form of suspended animation alone does not count. Elves tend to fall into this trope quite a bit in modern fantasy in part because their Beauty Is Never Tarnished. Same with Vampires and other undead subspecies who are unaging/dying beings who get to keep their mind and body. If it's purely artistic rather than biological, it's Artistic Age. For characters who look far younger than they are, but haven't yet lived longer than a human possibly could (say, an 80 year-old woman who looks 20), they're Older than They Look. See also Immortality Begins at Twenty, Not Growing Up Sucks. For the really, really extreme version, see Time Abyss. Optimistic characters will say this trope is sweet.

For ways in which works show off that a character is Really 700 Years Old, see Exposition of Immortality.