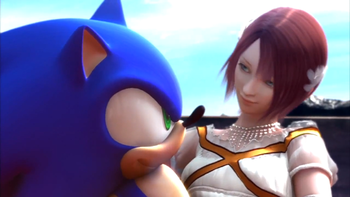 This trope is the reason this particular Interspecies Romance didn't go so well.
Advertisement:

For various reasons, humans may be illustrated realistically or in detail while animals appear cartoonish and/or unrealistic in a work of animated or illustrated fiction. Alternatively, humans may appear cartoonish, while the animals appear realistic or detailed. Fictional creatures which are neither human nor animal (such as elves and intelligent human-like aliens) may be placed in either category for illustration style when appearing in a work that includes both humans and animals. This trope may also apply to works without humans if there is a similar animal to fill the same role.

The human audience will generally better recognize the appearance of humans than other (real world) animal species, which could explain either form of this trope. If the wild animals look unrealistic, then most of the audience won't notice because they don't remember exactly what that species really looks like. The humans may also look more detailed to diversify their appearance.

If humans are portrayed as cartoony while other animals are realistic, this may be because it is easy for humans to recognize a character as a human even when the appearance is simplified, while they need to see more detail to know exactly what type of animal a character is. This is most commonly found in manga and anime, where the audience is supposed to relate only to the cartoony... MANGA/ANIME-ish! humans with big eyes, small mouths, and pointy noses, which conforms to the principle of creating cartoony-looking characters for maximum relatability and projectability noted in Scott McCloud's Understanding Comics. Animals just look like real animals most of the time, even in stories where the animal characters have a more prominent role that doesn't overshadow the human ones.

No Cartoon Fish is a sister trope, where fish are realistic and detailed while everything else isn't. This is a Graphical Trope.