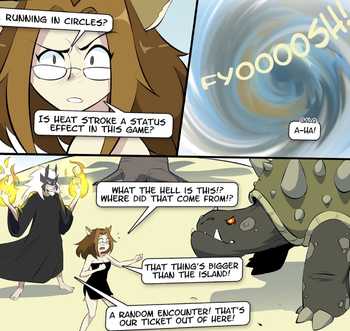 Durkon: Izzit just me, or does this boat seem ta get attacked by monsters WAY too often?
Vaarsuvius: I believe this is why they have been dubbed "Random Encounters", rather than "Statistically Probable Encounters".
— The Order of the Stick
Advertisement:

(For the proper experience, run the music from this video

Monster battles that spontaneously occur at random intervals while the player travels across an RPG. They are the same thing to video game RPGs that Construct Additional Pylons mechanics are to RTS games, Video-Game Lives are to Platformers, and dying every ten minutes is to Sierra adventure games: practically synonymous with the genre, and annoying as often as not.

They were invented for tabletop RPGs and are reasonably common there. The original rationale was that as characters crossed a world map with each square representing half a day's march, they could reasonably expect to meet a pack of wild animals or band of highwaymen every few days or so (the practical reason was to get players Travelling at the Speed of Plot without obsessively checking behind literally every rock, shrub and chair that they might encounter on the way). But in some games it seems you can't walk ten feet down a narrow dungeon hallway without getting ambushed by a somewhat illogical combat encounter with nine mummy wizards.

The spontaneous generation of enemies is old hat in games in general, but RPGs are a special case: In the Tabletop Games, not every random encounter was automatically a combat encounter, as players could choose to interact with their encounter non-violently, depending on the individual encounter and the choices of the player and GM (sometimes, that NPC or monster really does just attack on sight). These aspects are only tenuously connected in many Western games, and wholly separate in most eastern ones, to the point that there are different screens for combat and everything else.

Typically, random encounters only occur on The Overworld or in dungeons. If you run into a random encounter inside a town, it's likely a sign that something has Gone Horribly Wrong (unless the town is already known to be a rough neighborhood).

Having to fetch little Timmy from the forest is a common sidequest, and while Timmy is generally menaced by the monster of the hour, he presumably went unnoticed by the scores of flesh-eating slugs and mobile venomous plants that harassed the player characters every 30 seconds as they went in to fetch him. (Clearly, little Timmy Took a Shortcut.)

Often, there will be an item, ability, or mode of transportation that affects the encounter rate. Upping this rate can be good for Level Grinding, while abilities that shut off random encounters entirely may save the player some annoyance in the short term, but can also deprive the player of much-needed experience points to strengthen their party for the next plot-motivated battlenote In most cases, Random Encounters are not considered to be plot-centric and are just used to simulate a harsh environment. Some plot lines would not factor in to how random encounters go since they are considered outside of canon.

Often the breeding ground of both Goddamn Bats and Demonic Spiders, the former moreso (and, if you're lucky, Money Spiders). Typically preceded with a Fight Woosh and succeeded with a Fanfare, with Battle Theme Music playing throughout its duration.

The video game version is becoming something of a Discredited Trope nowadays, with fewer series playing it straight, and many of the big series dropping it in recent installments in favor of Pre-existing Encounters. It's still used, but it's not as universal as it used to be.

Subtrope of Random Event. Overlaps with But Thou Must!, when players trying to Enjoy the Story, Skip the Game can find this infuriating.

Compare Big-Lipped Alligator Moment, the film version. Contrast Pre-existing Encounters (a specific aversion where enemies can be seen on the field), and Roaming Enemy (for enemies that move and may be a Patrolling Mook, or anything which is neither this or Pre-existing Encounters). See also Encounter Bait and Encounter Repellant (for the mechanics of adjusting the rate of encounters), Escape Battle Technique (for the mechanics of avoiding them once they've started), and Fairy Battle (a variation where the random encounter isn't hostile).

Player Characters are often the only people in the setting who can't walk down the street without getting jumped by monsters, thanks to NPC Random Encounter Immunity.

Not to be confused with the musical troupe of the same name, who create video game-based Parody musicals.