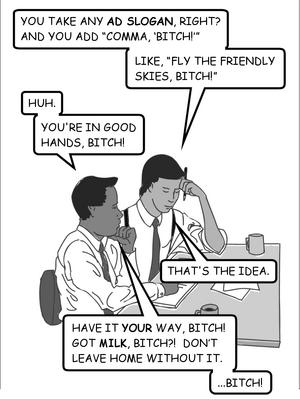 "Yippee-ki-yay, motherfucker."
— John McClane in Die Hard, quoting Roy Rogers while coining a Catchphrase of his own
Advertisement:

A trope where someone takes a notable quote or saying and adds a swear word or two at some point in there.

Why? Well, it used to be done for Rule of Cool (makes the phrase more badass), but now it's a Discredited Trope, which basically means this is done mainly for Rule of Funny now.

To count as an example, it has to meet some criteria:

Can overlap with This Is for Emphasis, Bitch! and Precision F-Strike.

Compare/Contrast Quote Mine (screwing with a quote, but pretending it's the actual quote).