Quote Mine
aka: Quote Mining 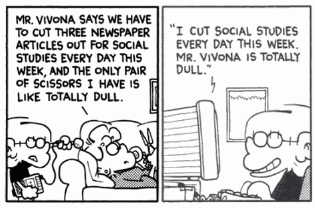 "This wiki is [...] 'stereotyped and trite.' In other words, dull and uninteresting. We are [...] about [...] showing off how snide and sarcastic we can be."
— The old TV Tropes Wiki Home Page
Advertisement:

Suppose Bob, a famous critic, says that Tropers: The Movie "had the potential to be a great work of art in different hands, but the lead actor is a drug addict and the director had no idea what he was doing." In the commercial, however, we hear that Bob has called the movie "[...] a great work of art[.]"

The commercial has just quote mined. It's a dirty, rotten, low-down trick, one of The Oldest Ones in the Book, and is a subtrope of Blatant Lies and Weasel Words. Features commonly in sloppy rhetoric and propaganda pieces. Unfortunately, this usually works with an ill-informed audience, as the speaker can usually expect that they will not check the source for the quotes. Frequently used as part of an ad hominem fallacious argument.

The act of quote mining is also referred to as 'quoting out of context' or 'contextomy'.

When this technique is practiced on audio to make a deceptive soundbite (as in confessional interviews on reality shows, or comments that are then used as voiceovers), it's called a "Frankenbite" — probably because in particularly bad cases, one can actually hear where two audio clips were spliced together. In some circumstances, this can be acceptable, provided the audience knows it's been edited and the meaning has been preserved.

Compare/Contrast Quote Swear Unquote (fiddling with quotes, but not passing them off as accurate). Also compare Manipulative Editing, Recorded Spliced Conversation, and Stupid Statement Dance Mix. Very likely to lead to Beam Me Up, Scotty!. Despite the similarity in sound, has nothing to do with Enemy Mine.

Sister Trope to Twisting the Words, when they did say the actual quote in question but a crucial nuance or meaning was misrepresented.

open/close all folders
Advertising
It can be safely assumed that if a review blurb contains ellipses, what is being left out is less than complimentary. For instance, if a blurb says "This film/song/game etc. is... an amazing achievement", you can bet that the full statement is something along the lines of "This film/song/game etc. is so mind-numbingly stupid that getting anybody to go see it/listen to it/play it would be an amazing achievement."
Anime and Manga
Comic Books
Comic Strips
Fan Works
Films — Animation
Films — Live-Action
Literature
Tyrants are prone to flagrant Crimes;
To Clemency his Crown he owes;
To Concord and to peaceful Times,
Love only is the worst of Foes.
Live-Action TV
Music
Mythology and Religion
Print Media
Radio
Theatre
Video Games
Webcomics
Web Original
Western Animation
Real Life
Feedback

In "Invitation to the Snooties" from "PB&J Otter," the Snootie siblings Ootsie and Bootsie record themselves making wild requests of their father for their birthday party, cleverly timing this with own responses such as "Absolutely! That's a capital idea!" to somebody he's talking with on the phone. Then, when he questions the arrival of these things, they play back the recording.

In "Invitation to the Snooties" from "PB&J Otter," the Snootie siblings Ootsie and Bootsie record themselves making wild requests of their father for their birthday party, cleverly timing this with own responses such as "Absolutely! That's a capital idea!" to somebody he's talking with on the phone. Then, when he questions the arrival of these things, they play back the recording.