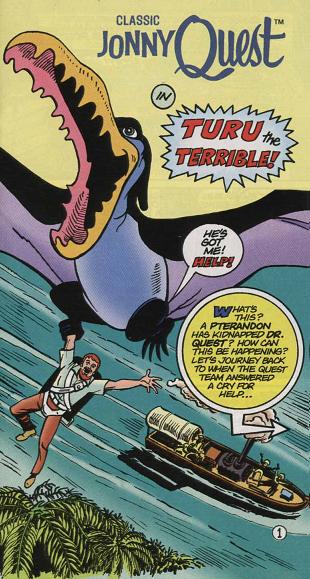 At least it's not a pterodactyl.note But the name Pteranodon misses the first "o".
"If dinosaurs are badly portrayed in movies, then pterosaurs have an even worse time!"
— Dougal Dixon
Advertisement:

In prehistory, Everything's Better with Dinosaurs.

While it is true that our knowledge of prehistoric fauna is steadily improving, the depictions in popular media do not seem to be as up to date with modern science. While dinosaurs are increasingly averting Science Marches On, however, the same cannot be said for the other dominant reptiles during their 200-million-year reign. As a case in point, look no further than their close relatives, the pterosaurs — the first vertebrates note that is, animals with backbones to fly.

Of course, nothing adds to a prehistoric atmosphere like tossing in some of these flying reptiles. However, it's a good idea to take most depictions of pterosaurs with a grain of salt. Most media will ratchet them up to being eagles or bats on crack, snatching prey (like tasty humans) and being far more agile than they were in real life. Keep in mind that as in the case of most other prehistoric animals, Rule of Cool very much applies here.

If you see a pterosaur represented in any piece of fiction, the odds are good that it will have at least one of the common stereotypical (and inaccurate) traits listed at these

The contents of these lists are summarized in the folder below.

And for the record, this trope's title is obviously a pun on the words "pterosaur" and "soarer".

open/close all folders
Advertisement:
List of Common Inaccuracies in Media