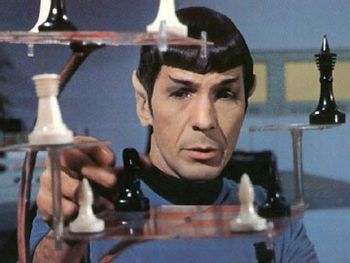 Because 2D chess is not challenging enough.
"Our love of what is beautiful does not lead to extravagance;
our love of the things of the mind does not make us soft."
— Attributed to Pericles
Advertisement:

While the Proud Warrior Race believes in warfare and martial honor as the pinnacle of cultural achievement, they have a counterpart in the Proud Scholar Race, who instead focus on matters of the intellect. Personality-wise, they may be aloof and detached, or quite gregarious and friendly (particularly if they're also The Empath). Either way, they have a tendency to be more intellectual, mystical or philosophical than most of the other species in the setting. This species of scholars tends to come in two flavors:

Proud Scholar Races of either stripe tend to be portrayed as more peace-loving than some other species, but they tend to be rather dangerous when provoked, using superior technology, Psychic Powers and hidden superweapons to turn their foes into dust. They won't necessarily be portrayed as nicer people—sometimes, their love of knowledge will make them sympathetic compared to the madmen running around hitting things with swords, but other times, it will make them cold, slimy, and sinister compared to the honest fighters doing their duty for their country. Similarly, any non-scientists in this race (no matter how important to their society) will suffer Klingon Scientists Get No Respect — err, Vulcan Warriors Get No Respect.

This race may be friendly toward humans, or it might shun them because it detests their violent ways, or sees them as so far below them as to be insects. This species might be descended from the Precursors, or at least remember a time when they existed.

If both these and the Warrior Race are played as villainous, they basically become a split about the two terrifying sides of the Nazis—the Warriors are the mighty soldiers and strategists slaughtering and conquering, while the Scientists remain at home torturing people For Science! and for hate. For this reason, when villainous, the Scientist race may be prejudiced and regard other races as fodder for slavery and experimentation.

When heroic, the race is quite likely to resemble an idealised depiction of the academic circles of the Ancient Greeks. Expect Crystal Spires and Togas. They may or may not be a Higher Tech Species.

When the Proud Scholar Race and the Proud Warrior Race are in opposition or rivalry, they tend to form an Elves Versus Dwarves dynamic, with the former taking the role of the Elves. This convergent evolution may be why many scholarly races take on elf-like features like pointed ears and a humanoid appearance. They may still retain nonhuman features such as unusual skin or hair colors, though; pale colors such as light blue are popular. Females of this sort of species tend to overlap with Green-Skinned Space Babe if they're actual aliens.

If they are into both learning and killing, they're a Warrior Poet Race instead. Compare Proud Hunter Race, Proud Merchant Race and, of course, Proud Warrior Race.