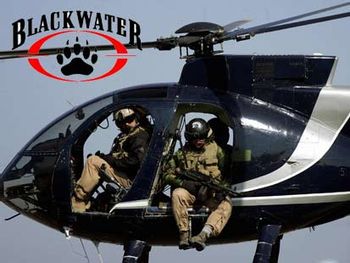 Van Owen and Roland
Tagon: Mister Grizzly, my men and I may not be nice people, but we're not bad people. We're hardworking, honest, and true to our word.
Ozvegan Griz: And sometimes you're bound by your word to kill people.
Tagon: But they're almost always bad guys and we only do it for the money.
— Schlock Mercenary
Advertisement:

Real Life PMCs run the gamut from dirty-working Hired Guns outfits to highly scrupled organizations with very strict rules about what they will and won't do, and for whom. Some PMCs provide armed security for Christian (and occasionally Muslim) charities in war-torn regions like Darfur (the contractors who do this kind of work often give their clients a discount rate — it's charity, after all). Others patrol African elephant habitats hunting heavily armed ivory poachers. Even those who take corporate contracts are much more likely to be doing "rent-a-cop" work making sure nobody blows up a pipeline than "massacre uncooperative village" jobs (although that does sometimes happen). Some PMCs are good people doing good work for good reasons (and making a living doing it). Others are willing to work for drug cartels. It is a very large and diverse category that probably shouldn't be painted with a broad brush, good or bad.

A sub-trope of Hired Guns, and can overlap somewhat with the Professional Killer. If employed by a Mega-Corp, then Corporate Warfare can be expected. Commonly a favorite industry of a Proud Warrior Race. A Private Intelligence Agency is usually another service a PMC will provide to its clients.