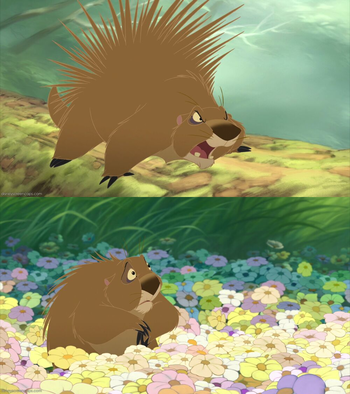 As you walk along the street
A porcupine you meet
How do you shake his hand when he says hi?
Carefully ... carefully .... careful L-Y
— Tom Lehrer, "L-Y"
Advertisement:

Porcupine characters show up in nearly every form of media. It seems that porcupines tend to fall under two distinct personality types: They're either A) the Grumpy Bear, Jerkass, or Ax-Crazy Sadists, malevolent and bloodthirsty monsters who enjoy their malices, or B) The Woobie, shy and lonely because no one wants to go near them.

Many works of media (particularly in Video Games where porcupines are often portrayed as villainous henchmen) portray porcupines as being able to shoot their quills as projectiles, even though this isn't true in Real Life (North American porcupines swing their tails at predators to dislodge the quills in their faces, while Old World porcupines tend to charge backwards at their enemies instead). Those on the receiving end of one tend to become a Human Pincushion (or Animal Pincushion) or in worst cases Cruel and Unusual Death. If the result is Pain to the Ass, it may lead into a Pain-Powered Leap.

If the porcupines are villains, expect them to have Spikes of Villainy. While a single porcupine can be considered threatening at worst, a bunch of these can form Spikes of Doom. In extreme cases, the porcupines may be portrayed as meat-eating predators who feeds on nothing but flesh (despite the fact many porcupines are herbivores; though the Indian crested porcupines do scavenge on occasions). If the porcupine in question is a giant porcupine, prepare to be afraid.

NOTE: This is NOT a list of all porcupines or similarly-spiny mammals in media. This is a list of such mammals being stereotypes related to their spines, as having "prickly", grumpy or outright malevolent personalities.

When your PMS turns you all, ahem, angry and PRICKLY.

When your PMS turns you all, ahem, angry and PRICKLY.