Power of the Void
aka: The Power Of The Void 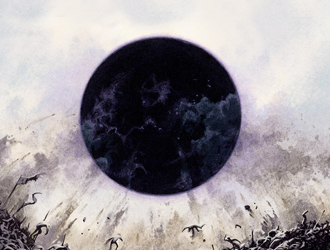 Black hole sun, won't you come...
"If light and darkness are eternal, then surely we nothings must be the same... Eternal!"
— Xemnas, Kingdom Hearts II
Advertisement:

Some characters use the Power of Darkness to show off how cool they are. Not this guy. When darkness isn't dark enough, the only thing that can properly express your morally dubious badassery is the Power of the Void—power over nothingness.

How this works can vary. How are you going to make cool fight scenes when a character's power is the ability to control nothing? In many cases, this is by giving him lasers, energy blasts, and various other powers that other characters already have, with minor cosmetic changes to show that they come from the Void. Other works are better about portraying this; erasing objects and unfortunate people from existence, manipulating black holes, and draining Life Energy. Powers over cold and darkness come up often as well — this makes sense, since they are technically defined by a lack of energy. Sometimes, this also involves partial or total Cessation of Existence as a physical trait (in the partial case, functioning much like an Absurdly Sharp Blade in that it "cuts" by removing physical matter, and in the latter case simply sucks an object or person into nothingness). And sometimes it goes in the opposite direction. Since many creation myths involve creation from nothing, some writers have the power of the void grant the power to create as well as destroy, circling back around to Frickin' Laser Beams of Pure Energy, or even The Power of Creation.

For works that are Eastern-inclined, they may be taking the idea of nothingness as described by Buddhism, "Mu", or the 5th Japanese element, "空/Kuu" ("Void/Sky").

For obvious reasons, the Power of the Void is frequently the gimmick of Straw Nihilists, Omnicidal Maniacs and outright Eldritch Abominations. It can also be the result of a Yin-Yang Bomb, in which case it is equally likely to be found in the hands of someone more heroically inclined.

Interestingly, Void is sometimes considered the Fifth Classical Element (not to be confused with the Fifth Element), particularly in a universe that uses the Void Between the Worlds. However it's usually considered Non-Elemental because it (appropriately) lacks elemental traits. It may even be an Infinity +1 Element. Contrast with Light 'em Up.

Alternative Title(s): The Power Of The Void