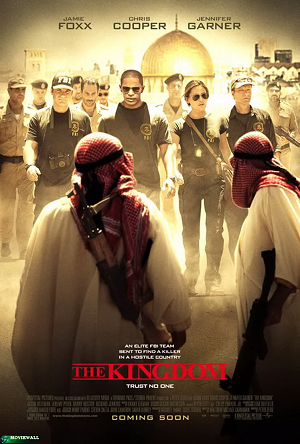 9/11 did a lot towards making the mere mention of terrorists in fiction an incredibly risky gambit in the eyes of Hollywood. Many executives even went so far as to remove the World Trade Center from their movies to avoid offending or saddening people in the years afterwards, for fear of it being too soon.

For Films and Live-Action TV series, the time after September Eleventh can be classified into three periods:

The First: Where a great, great many movies after 9/11 don't talk about it, mention it, or even imply it happened. Stories set in the US, especially New York, after the attacks that should logically deal with terrorism never even talk about it passingly.

In The Second, as these fears subsided, writers and directors would dare to be brave and artsy by using incrementally larger references and even plots related to terrorism.

Until eventually, The Third brought the opposite reaction to the first: movies that go overboard in dealing exclusively with terrorism.

These movies (though Live-Action TV deals with this too) tend to fall flat for several reasons. In the First, because of the total absence of what should be logically there (lame excuses add to this). The second tend to be too self-congratulatory for the relatively minor mention; leading into the third turning Anvilicious in their focus on terrorism.

Another aspect is that the armed forces tend to be given one of three treatments: puppy-kicking monsters, a helpless Red Shirt Army, or a heroic Badass Army. This last usually happens in action movies that want to kick terrorist tail. This (for international viewers anyway) tends to have a bit too much America Saves the Day, considering the war is ongoing.

Interestingly, shows that dealt with terrorism before 9/11 tend to fare better than those made after, albeit they reacted in different ways.

A Sub-Trope of The War on Terror. See Western Terrorists.