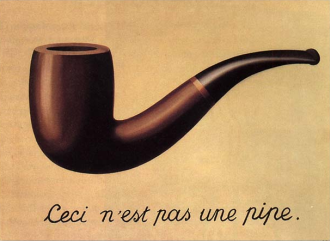 This is not a pipe.note It's a central nervous system's perception of a retina's interpretation in electrical impulses of a photonic projection of a digital recording of a scan of a photograph of a painted representation of Magritte's perception of a pipe. Or if that’s too much of a mouthful, it’s not a pipe, just a picture of one.
"The simulacrum is never that which conceals the truth — it is the truth which conceals that there is none. The simulacrum is true."
— Jean Baudrillard, Simulacra and Simulation
Advertisement:

Post-modernism in books and movies was largely a questioning on the nature of narrative and plot and characterization. An epic story with The Hero orbited by Satellite Characters was succeeded by stories with large casts with The Hero, if it is used, openly presented and critiqued as an Audience Surrogate. Essentially, authors wanted readers to be more aware of how storytelling works and interact and question it so that they become active rather than passive audiences, leading to Viewers Are Geniuses, the aversion of Small Reference Pools, and all kinds of Genius Bonus. In Europe, this was related to a growing awareness that modern democracies and totalitarian governments are too vast for any single heroic figure to resonate: WW2 wasn't won by a single great general's gambit or small heroic actions, but a Gambit Pileup so vast that the world is still trying to put it together, and ultimately the Allied Powers were too late to do anything to halt The Holocaust aside from counting the bodies and helping the survivors. After that, artists and philosophers felt that old forms of storytelling would no longer work in this new reality. The Frankfurt critic and philosopher, Theodor Adorno, famously stated that poetry was impossible after Auschwitz, which he did not mean as a literal statement but a general feeling, that was echoed and felt by many artists who felt that conventional storytelling no longer explained the tragedy and horror of the times and that any artist or philosopher who tries to come up with a "Grand Narrative" that ties everything together is either delusional or dangerous. Post-modernist narratives can be generally distinguished by their dearth of characters with large-scale agency. The actors in earth-shaking events are governments, institutions, and societies, and the story deals with the ways in which the characters do or do not fit into that broader picture.

This led to all kinds of Take a Third Option in storytelling, efforts that echoed conventional pre-war genres but with a more contemporary, darker twist, the Happy Ending was often shown with Stylistic Suck or a parody, and while Downer Ending never went out of style, we now had the Gainax Ending where the story goes beyond the fate of the characters and the confines of the story, sometimes directly addressing the viewer, other times leaving them with a sense of irresolution and uncertainty, sometimes veering to True Art Is Incomprehensible levels but with the intention that audiences should think and engage with the work, however difficult it may be, as per their own experience without the story telling them what to think and how to feel. Deconstruction was developed as an independent strain in this time and post-modernism generally features a strong deconstructive aspect. In general, postmodern writing involves a blurring of boundaries. An example of this is blurring the boundary between the reader or viewer and the fiction — for example, a TV show that acknowledges that it is not real (contrast This Is Reality). However, Postmodernism can also be applied to fiction that mixes different genres into something new, such as the way that Cowboy Bebop combines western tropes with science fiction and various movie pastiches. Here, Postmodernism describes a self-referential fiction, a fiction which references other fiction, or a fiction which displays some awareness that it is a fiction. The Subverted Trope, Discredited Trope, lack of Genre Blindness, Deconstruction of conventional boundaries, and Playing With the Fourth Wall (or lack thereof) are all hallmarks of Postmodernism. Expect Mind Screw.

Postmodernism is also a popular school of thought in the social sciences and humanities, largely revolving around the idea that a cogent argument doesn't necessarily have to make points that are actually true, while arguments that may "technically" be true in some sense are not necessarily either convincing or valuable. In academic disciplines, the biggest impact that Postmodernism introduced was to sever the idea of history, society, or existence, being linear and progressive (i.e. the world is going to get better and better) and that led to the popularity of Alternate History and For Want of a Nail not only in speculative fiction but also in serious works of non-fiction where people showed that a lot of things people saw in history wasn't inevitable but in large part accidental or came down to pure dumb luck. Postmodernist theorists by extended research also pointed out how the idea of society going somewhere was Newer Than They Think, based on Entertainingly Wrong assumptions that have become Dated History (a strain that is called Historicism or New Historicism). Contingency and agency became watchwords in post-modernist inspired works. Post-modernist inspired accounts insist that life is in large sense a Random Events Plot and much of what we consider the "pursuit of knowledge" is a narrative that distracts us from realizing that, drawing inspiration from Existentialism.note But differing in that existentialists insist on agency to choose and engage actively with one's ideas and views — i.e., if "the pursuit of knowledge" is not inherent in society, then it is up to humans to actively make a society that promotes knowledge knowing fully well the limitations of that choice. Postmodernism generally doesn't advocate engagement, which has led the kind of people who care about such things to accuse it of promoting nihilism.

Postmodernism, as a major force in criticism and academia, has also attracted a number of critics. Conservatives have lambasted postmodernism for its moral relativism, while Marxists have attacked it for its lack of a grand narrative, de-emphasis of class consciousness, and acceptance of capitalism, even if postmodernism seems ambivalent toward it.