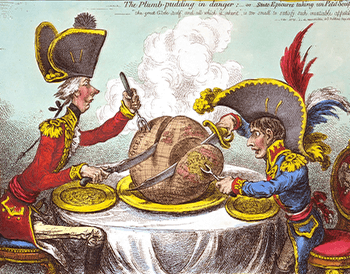 These are those little boxes on the editorial page of your local newspaper where cartoonists try to educate and entertain the masses via their snappy, illustrated political commentary, usually on current events. Done well, a political cartoon will creatively expose the social and political hot buttons of the day; in fact, one of the precursors of the Mexican Revolution was a bunch of perfect political cartoons. Done poorly... well, they're easy to avoid.

The first political cartoons were drawn by William Hogarth in the 1720s, before newspapers as we know them. An early American example was Benjamin Franklin's drawing of a snake divided into 13 parts, which he captioned, Join, or Die. Some famous political cartoonists of the past:

The Pulitzer Prize for Editorial Cartooning is the top prize for these kinds of cartoons in the United States. Although it is mostly awarded to political cartoons, it has also been given to editorial cartoons with no political content, as well as two daily comic strips: Doonesbury in 1975 and Bloom County in 1987, both of which feature topical political humor.

With the age of the internet, political cartoons can be community driven projects such as Polandball

The now-defunct UK magazine Punch! was famous for its well-drawn cartoons for a long period, a number of them turning up in school history books.

Most British newspapers still have political cartoonists on the strength. A typical example would be Steve Bell, who draws both editorial cartoons and a long-running daily political strip called If for the Guardian. Cartoonists of other political hues are also available.