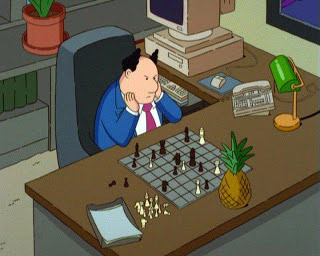 Stupid fruit! ...Best 3 out of 5?
"Maybe you could tell me what is going on. And please, speak as you might to a young child. Or a golden retriever. It wasn't brains that brought me here, I assure you that."
— John Tuld, Margin Call
Advertisement:

While The Peter Principle states that all managers are incompetent by definition, The Dilbert Principle claims that the most incompetent and irrational workers will be Kicked Upstairs where they can no longer disturb the productive flow (at least in theory). This is the origin of the Pointy-Haired Boss.

Incompetence, Inc. is a likely place to find a PHB, but just about any organization with a large hierarchy will do. Occasionally he will be surrounded by very competent workers when Conservation of Competence is in effect.

Very often such a boss is not merely incompetent but evil; the kind of guy who takes all the credit for his employees' success but blames them for his own failures. In these cases he can be more contemptible than the CEO whom he serves: while the CEO is only concerned with padding the bottom line (thereby keeping the company humming along), the Pointy-Haired Boss will sink to any depths to protect his job—a job little better than that of his subordinates, yet one the PHB is completely unqualified for—and will cut the knees out from under employees to make themselves look competent.

On other occasions, they may have been competent and serious about their job at one point or another, but a combination of having to deal with a bunch of angry employees with (frequently unfounded) axes to grind and higher-ups who were around only to micromanage to hell and back and act as nuisances eventually drove them to stop giving a damn altogether and be just barely competent enough to not attract the ire of the upper management.

Less experienced examples may instead feel overwhelmed or unprepared, especially if they're leading an unfamiliar team, and thus compensate by leading with an iron fist and using lots of Make an Example of Them to show employees just how much they mean business; the likelihood of this happening rises greatly if they suspect that their inexperience is being taken advantage of. This typically leads to a vicious cycle, as the people under them will rightly view them as power-tripping assholes who don't know how to lead, which leads to even more excessive displays of dominance, which in turn causes the employees to hate them even more, and the cycle continues until the manager is reassigned or fired or the employees mutiny.

Occasionally he'll also hold the title of Benevolent Boss as well if he's not too competent at handling the actual work yet has the social intelligence to deal wisely with his workers.

All too often this is Truth in Television; one technical term is "manglement", a portmanteau of "mangle" and "management". Compare with the military's General Failure. Shares a lot of overlap with a Clueless Boss.

Though not unheard of, this trope has nothing to do with actual, pointy-haired bosses or Boss Battles. Not to be confused with bosses with Spiky Hair.