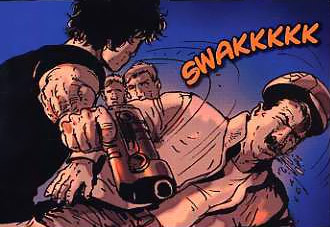 Pistol-whipping with your finger on the trigger: Don't Try This at Home.* Maybe it's because he said 'shenanigans'?
"If you get a customer, or an employee, who thinks he's Charles Bronson, take the butt of your gun and smash their nose in. Drops him right to the floor. Everyone jumps. He falls down screaming, blood squirts out of his nose, freaks everybody out. Nobody says fucking shit after that."
— Mr. White, Reservoir Dogs
Advertisement:

Knocking someone out by hitting them with the butt of a pistol. When done with a long gun (e.g. rifle or shotgun), it is referred to as a "Butt Stroke", or "Butt Stroking" (and rest assured, some people

have had a gay old time with that bit of terminology).

If you do this in Real Life — with enough force — you can actually kill someone by cracking their skull. Also, even the butt of a gun has quite a few pointy parts, which, if whacked against your face, will cause a lot of bleeding and probably leave a large and permanent scar. Pistol whipping and butt stroking are an outdated way of striking somebody with your weapon. The proper way is to thrust your barrel in a forward motion into the target. Smashing the barrel and slide of your handgun into somebody is a good way to throw off its aim and possibly damage it; it doesn't work as well with lightweight modern polymer guns. Muzzle strikes to the head are considered a lethal strike. Barrel strikes are typically used to put down a person who isn't considered a lethal threat. The point is to keep the ability to shoot at all times and always know what you're aiming at; butt stroking or pistol-whipping sweeps yourself or buddies in the line of fire, a gross violation of basic gun safety just a few steps below twirling it around your finger. A proper less-lethal weapon strike can be seen in Safehouse by Denzel Washington's character to Ryan Reynolds's character in the soccer stadium, though a strike of that nature would typically break the sternum in reality (a good point towards remembering that when it comes to guns, there is no such thing as "non-lethal").

One purpose of Pistol Whipping is to humiliate your captured enemy (or moronic henchman). You've got a gun, and you could kill them right there, but they're so insignificant, so pathetic, so helpless, that you can just smash them across the face and be done with it. It also causes a lot of bleeding, making a character look a lot worse than they really are.

You may be asking, Why Don't You Just Shoot Him? As Elliot Stabler of Law & Order: Special Victims Unit once answered, "Where'd the fun be in that?" Alternately, the weapon's wielder will be locked in close combat or will be out of ammunition, forcing them to literally use the only weapon they've got on hand. It also serves as a quick option to incapacitate a person without killing him, since pistol-whipping is slightly less likely to be lethal than shooting the guy.

A rare case of the Evil Overlord List not reflecting common sense as nearly all modern militaries train their troops in how to fight using their rifle as a melee weapon (although it might be that the Evil Overlord thought that it can damage the gun or not be deadly to the hero). This was also fairly common during the time periods where firearms were not very advanced and required a lot of time and effort to reload, which meant that sometimes it was more prudent to use your gun as a melee weapon rather than trying to reload it in the middle of battle. Of course, fighting with a rifle is also quite a different thing from doing so with a pistol.

May be a form of Quick Melee. For another kind of melee attack with a firearm (preferably a sharp one), see Bayonet Ya.