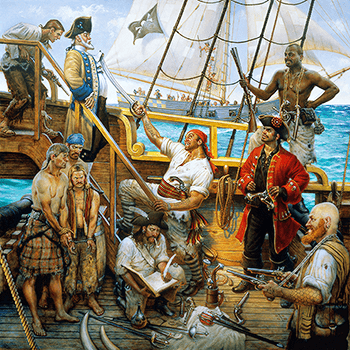 Yo ho, yo ho, a pirate's life for me.
"No, Frederic, it cannot be. I don't think much of our profession, but, contrasted with respectability, it is comparatively honest. No, Frederic, I shall live and die a Pirate King."
— The Pirate King, The Pirates of Penzance

Not those ones. Not these, either.

Dashing villains who lived free on the open sea, with a parrot on their shoulder, a cutlass in their hand and a chest full o' gold. Fond o' drinking and prone ta fights, out to live "a short life and a merry one." The pirates we know and love were greatly influenced by those of Peter Pan and Treasure Island.

Both types are among The Oldest Ones in the Book, and can, indeed, be found in the same works.

In fiction, pirates can be found primarily in the Caribbean, a few hundred years ago, but they pop up anywhere and everywhere so any seafaring hero can expect to meet pirates at least once whether in Feudal Japan or even Ancient Greece. Elizabethan-era privateers (such as the aforementioned Sir Francis Drake) used to be quite popular but have fallen out of favour in recent decades.

Space Pirates occur in the far future, sailing the ocean of space. They usually throw people out of the airlock rather than making them Walk the Plank, and may substitute some alien flier for the parrot.

If the pirates are mixed up with the occult, expect voodoo, zombies and/or skeletons (sometimes including the pirates themselves), and cursed treasure.

Not to be confused with real pirates. Were you attacked by pirates around the 1700s, the "nicest" you could hope for would probably lean towards Chaotic Good—they would steal your things but might not harm you (likely for pragmatic reasons: a crew that got a reputation for accepting surrenders and not massacring prisoners would be more likely to see more surrenders in the future, making their "job" a whole lot safer and easier for them).

("Pirates of the 20th Century", one of the first real Soviet "action" films) and the Japanese anime Black Lagoon being some of the few rare examples. So far, the pirates currently active off the coast of Somalia have been interested in money, not lives (indeed, their "business model" is based on extorting ransom from the shipping companies), but the entire meme of pirates is in danger of becoming a huge "Funny Aneurysm" Moment these days.

Note that in fiction, many Pirate Captains are presented as absolute masters of their ship, with The Mutiny being regarded as just as serious as on merchant or naval ships. In Real Life, the "lawless men"—who rebelled against the very notion of having masters—often constructed crude democracies. It was not uncommon for the captains of large, organized vessels had absolute command only in battle; out of battle, he could be freely deposed—and often marooned—for incompetence. Even those that did comprise the single authority on their ship could find themselves out of the job if they screwed up enough.

there's a running joke about them being the arch-enemies of Ninjas.

Honored every September 19th with International Talk Like A Pirate Day.

Reading/watching/playing any of the below works, at least in parrrt, would be a good way to celebrate.

See Pirate Tropes for a full list of tropes associated with pirates and their kin. Compare the Outlaw, the Western-themed equivalent of the pirates.