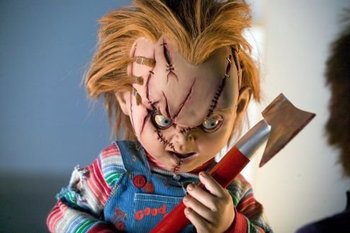 This doll is killer.
"How evil can a doll be, anyway?"
— Mayura, Mythical Detective Loki Ragnarok

Dolls, marionettes and puppets that are either possessed by a bigger evil like demons or ghosts, or alive with a murderous streak, mindlessly attacking anything in sight.

In Video Games, they usually appear as the Big Bad's basic Cannon Fodder army or just lesser enemies that just get into the heroes' path and are dispatched without much effort. In other media, they may be featured as the main antagonist.

See Evil Puppeteer for cases where the one controlling the puppets is evil. Not to be confused with Bro Strider's lucrative puppet pornography business.