Person as Verb
aka: I Pulled A Weird Al 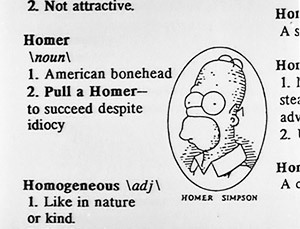 Probably not how he wanted to be remembered.
"You've been wrong so many times that I'm not even going to say something is wrong anymore. I'm going to say that it's 'Dorian.'"
— Dr. Cox, to John Dorian, Scrubs
Advertisement:

Pop culture can be an interesting thing. Slang is in a constant state of flux, always changing. But for some things that stand the test of time, it will be adapted into our descriptive terminology.

Person as Verb is the practice of describing an action using a cultural reference—typically by naming a character known for doing the same thing. The name of the show/book/whatever, or the writer/actor/whatever, may also be used. Often the exact usage will be "They just pulled a...(character-name)" or "They did a... (character-name)."

This is best used when it comes to the more universally understood terms. For example, instead of saying "Bob fell down the chimney", someone will say "Bob pulled a Santa Claus". In other times, just to play with this trope, writers will put in the most obscure reference to throw people off. A closely related use of this trope is to acknowledge the actual reference instead of just using it as a substitute, e.g. "So... is Santa Claus your hero?"

Orphaned Etymology comes from these sort of terms being transported into a setting where it doesn't make sense (ie a fantasy setting wouldn't make reference to a movie).

This trope is widespread in Real Life, as the Real Life examples would suggest.

It also happens on this wiki itself (such as with "MacGyvering")—we call this being a Trope Namer.

Alternative Title(s): I Pulled A Weird Al, Person As Noun