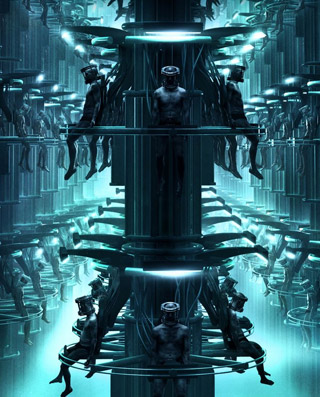 Were you raised in a barn?note Shut the fuckin' door!
"The machines had found all the energy they would ever need. There are fields, Neo... Endless fields, where human beings are no longer 'born': We are grown."
— Morpheus, The Matrix

Want to show that the bad guys (or possibly the Alien Invasion) are really, truly evil? Want them to cross the Moral Event Horizon without having to do much work? Want them to just terrify everybody into oblivion? Easy! Just state — or really heavily imply — that they breed humans like livestock, or keep them like animals in vast People Farms. Their purpose needn't be specified. Eating us? Harvesting our souls? Being bred for our skills in magic? Human Resources? Because they like to watch or more sinister reasons? Doesn't matter. Just the implication is enough to squick people.

While it's true that humans are just another species of animal on this Insignificant Little Blue Planet, we tend to think ourselves above mere animals — among other things, we believe that all of us have an inherent right to freedom, safety from imprisonment without due cause, or abuse both physical and emotional. People Farms play to lots of Primal Fears and Squicks at once — fear of imprisonment, enslavement, death (if we get treated to a culling of unfit stock), rape (if there's a "breeding program" going on, which participants have no choice in), and the general sense of being controlled. If it's our fellow humans doing this, you can be certain that their contempt for their fellow men is absolute. If it's an alien race, you know they obviously didn't get the memo that Humans Are Special. Of course, other sapient species can be substituted for humans, provided that they're sympathetic.

It doesn't help that the idea of wide-scale human imprisonment and abuse puts people in mind of the Holocaust.

A major example of Industrialized Evil.