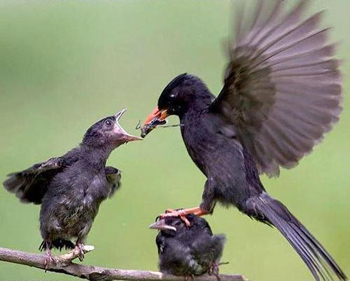 It's tough being a kid in Fiction Land. Bad enough when you're an only child, but if you're among a pack of siblings, this particular trope is nearly guaranteed to raise its head at some point in order to make life even more difficult.

Parental Favoritism is just what it sounds like — one child is given preference over their siblings. In order to qualify, this has to be consistent. One child being asked to do the other's chores because their sibling is sick is not favoritism, although that won't stop the kid lumbered with the extra work from grumbling. But one child having to do all the chores on a daily basis, while their sibling sits and plays video games, is definitely favoritism.

It may show itself in a variety of ways. If there is an argument or fight, the parent(s) will always take the side of one particular sibling, and the other(s) will be the ones being scolded/punished. The parents may brag about one child in particular and be admonishing or dismissive of the others for their faults, regardless of the achievements of the brothers and sisters. A regular line that may be entailed with this is a variant of, "Honestly, (insert name), why can't you be more like (insert favorite's name)?" There may always be one particular kid who gets out of doing their chores, even if the other kids get pulled up for forgetting to tidy their room.

Sometimes, there may be more than one "favorite", or the mother and father will have different "favorites", making life even more of a headache for their siblings.

Any of these criteria can backfire. For example, one child might be the favorite because they look and act just like their saintly, deceased mother. Another might be just the opposite — The Un-Favourite — because of their resemblance to the mother that walked out on the father — or even because they remind the father of the saintly mother. If the saintly mother died in childbirth, then the poor kid who was birthed this way usually has a hell of a lot of resentment to get over, no matter what the physical similarities, often due to the father, consciously or unconsciously, blaming them for the mother's death.

Occasionally, parents have a child that naturally requires more care and attention than the others, because they're very young, disabled, or psychologically damaged. This will still seem unfair to the other kids who get less of their parents' time, but it's a necessity rather than favoritism... usually. This is a favorite plot for children's books and television, where the lead character is jealous of a new baby sister or brother only to be reassured that "we love you just as much." On the other hand, if the favorite is Too Good for This Sinful Earth, the parents may never learn to appreciate their living children.

Sometimes, the parents are reasonably handing out the privileges and responsibilities with age. When the older child looks only at the responsibilities and the younger at the privileges, both can come to the view that they are The Un-Favourite. Or they may responsibly differentiate, but the musically untalented child may resent the lessons as favoritism, and the talented one, the other's free time as favoritism; or the child who must do all the chores resents the sickly child's confinement to his bedroom and inability to play. Cue Sibling Rivalry.

Of course, it is common that the parents are not aware of their favoritism and may be appalled at themselves upon realizing it. Very few parents would actually pursue favoritism with the knowledge of the other children's hurt feelings.

In fact, the obligatory "talk with the parents" is normally part of a Parental Favoritism plot...but that does not guarantee it will solve anything. If the writer is trying to Hand Wave the glaring bias of the parents, there will be a scene where mum and dad will give a long speech on how they value all their kids equally and will tell The Un-Favourite child that making them live in the basement and forcing them to bow whenever their sibling enters a room is really a mark of their esteem. The words "you're the responsible one" will be mentioned in some form. A more realistic version is where the big talk is honest, and the parent doesn't bother trying to justify their actions but do realise they were wrong and attempt to make amends. This is regularly done to "humanise" the hitherto parents — but it's too late. By the time of the talk, most of the audience will already be set against the parents, and it'll take a hell of a lot of good writing to redeem them. If the parents have clearly realized their foolishness and have shown to be really sorry, then this MAY take a lot of weight off them.

Parental Favoritism can have a huge impact on characters even when they become adults. The Favorite will either be spoiled and throw a tantrum if (s)he doesn't get his/her own way, feel that they were a sort of "experimental" child and develop insecurities, or be a Nervous Wreck who permanently fears that he or she won't meet the parents' expectations; kids at the bottom of the pecking order will usually be bitter and cynical about relationships and family life (and often blame the favorite children alongside the parents), or have serious self-esteem issues, leading to self-deprecation or clinginess as ways to compensate.

This is all too often Truth in Television. The friendship version of this trope is Friendship Favoritism and the grandparent equivalent is Grandparent Favoritism (though it's not unheard of for the two tropes to overlap).