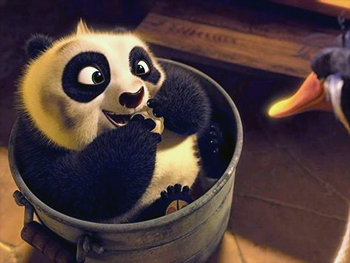 Who needs a caption when you can just look at his chubby widdle cheeks?
"I bring PANDAMONIUM!"
— Pandaren Brewmaster, Warcraft III
Advertisement:

Proof that not all Bears Are Bad News. Given the iconic status of pandas, it's not surprising that they turn up a lot in media, especially while looking cute.

Apart from their striking black and white fur, the black spots around their eyes gives them an appealing sleepy look that seems to match their adorably clumsy behavior. Furthermore considering that they are often seen lounging about, peacefully eating plants instead of hunting, it makes them seem so innocent. In addition, they are one of the few animals who have a protruding bone in each paw that acts as an opposable thumb to grasp objects, giving their eating habits an appealingly human-like appearance. Keep in mind that eating bamboo requires a large amount of chewing. That round adorable face houses some powerful jaw muscles.

As a side note, zoologists debated for years whether pandas were more closely related to bears or raccoons up until DNA stepped in to settle on "bear, albeit primitive".note  To be clear, this refers specifically to the giant panda. The much smaller red panda, which was for a long time believed to be a related species, is actually a musteloid, meaning it's more closely related to both raccoons and skunks. But even today, some people will still incorrectly call someone out if they refer to pandas as bears.

Finally, just in case you're Too Dumb to Live, cute as they are...do not try to cuddle a real life panda. Seriously. Unless you're Shaq.

◊ Pandas may look cute and cuddly, but they are still bears. Very mean bears. However when they are young and in a playful mood, just you try to resist them when they approach you

with all their charm turned up full blast. More recent depictions of panda characters in popular culture seem to be subverting the usual "passive and cuddly" persona the panda has built up over the years by depicting them as any other sort of bear... Or at least one that somehow knows how to use Martial Arts.

This could've been named "Everything's Better With Pandas", but the pun was too obvious.

A Super-Trope to Fighting Panda, where pandas are portrayed as martial artists. Not to be confused with the controversial practiced of pandering — sorry, pandaingnote Pandas are native to China, you see. — to the Chinese audience by making films designed to pass through their censors and not get Banned in China, nor to be confused with pediatric autoimmune neuropsychiatric disorders associated with streptococcal infections, or PANDAS for short, a hypothesis that a subset of children exists with rapid onset of obsessive-compulsive or neurological tic disorders

. See also Yet Another Baby Panda and What Measure Is a Non-Cute? (one reason pandas get so much more attention than similarly endangered animals.)note The IUCN upgraded the status of the giant panda from "endangered" to "vulnerable" in 2015.