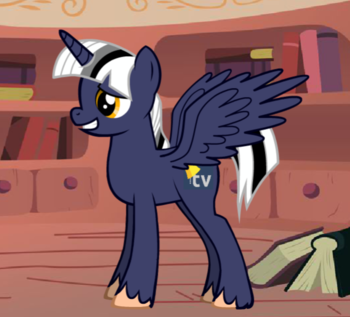 Introducing: Tropey the Alicorn! Part pegasus, part unicorn! Full Time Lord! Copyright TV Tropes. Do not steal.
"I even made my own Gemsona. My gem is on my tail, and my weapon is a frying pan."
— Mr. Gus, Steven Universe, "Say Uncle"
Advertisement:

An Original Character is, in the simplest terms, a new character created in a Fan Fic or other work that does not come from an existing copyright work. Any and all Characterization Tropes can apply, along with employing any and all tropes in general. The only real distinction between original and regular characters is that the former are synthesized specifically to unofficially integrate with the canon for the purposes of the story. The vast majority of fanfiction makes use of these, ranging in importance from being background extras to stealing the spotlight of the canonical characters.

This isn't necessarily a bad thing. After all, all characters were new once. Series that are structured around new characters every week such as Monster of the Week, Victim of the Week, or Girl of the Week actually require that the author create original characters in order to maintain the Original Flavor of the series. Rarely, these can become a Recurring Fanon Character, one popular enough to be widely used in fanworks throughout the fandom.

Attempting to list every instance (or even every "notable" instance) is rather pointless—they are almost as numerous as fan fics themselves. Indeed, TV Tropes does not permit articles for original characters unless they appear in a published work, and then only in Characters subpages of that work.

The commercial side of this, adding new or re-imagined characters to a non-copyright work, is Serious Business thanks to international laws that consider original adaptations of long-standing public domain works to be copyrightable; but considers further derived works an infringement of intellectual property. This is why companies like Disney can freely adapt The Snow Queen by Hans Christian Andersen into Frozen (2013), while at the same time suing those who make derivatives of the latter.

A Canon Foreigner or Canon Immigrant is what happens when an Original Character is created for an official adaptation of an existing work, and sometimes the term is used as a derogatory one.

Not to be confused with OOC, although a certain type of OC may cause OOCness in canon characters. Also don't confuse with The O.C., though O.C. original characters might be out there.