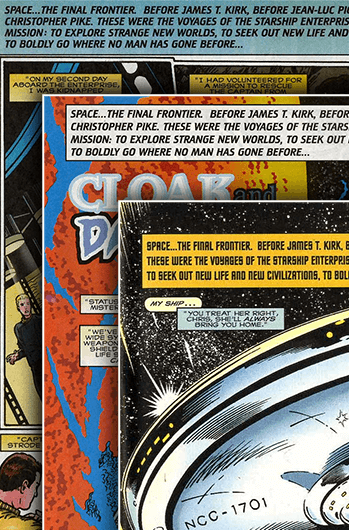 A short monologue at the beginning of a series (usually during the Title Sequence) that briefly explains the series's premise. These are typically vague and prosaic, sometimes falling into Fauxlosophic Narration, and are delivered either by a lead character, or by a Narrator. The content is similar to the expository type of theme tune.
Advertisement:

Usually, these monologues do not change much over the course of a series, though some shows do revise them from season to season. The whole concept is probably an artifact from the days of radio, when, lacking title graphics, shows needed a memorable speech at the beginning to identify themselves to listeners.

Sometimes, a show's first episode will start with a "Cold Opening", another name for The Teaser, and in every episode thereafter the Opening Narration will take its place. This will only happen if said episode is a Welcome Episode or an Everyone Meets Everyone Premiere.

Also becoming increasingly common in Animes is to use a clip montage of the respective episode with the show's main character(s) explaining the plot of the episode.

Especially common for Speculative Fiction; often because the assumption that Viewers Are Morons prevails.

Also known as a prologue or a "saga sell", an opening narration is often used to 'set the scene' at the opening of a show that might be confusing for first-time viewers (Joss Whedon famously used one for Buffy the Vampire Slayer, as the show was initially a mid-season replacement and new viewers might not 'get' the concept).

See Opening Monologue when this trope is used for standalone works or exclusively at the beginning of a series. See also Opening Scroll and Rules Spiel. Contrast with Signing Off Catchphrase.