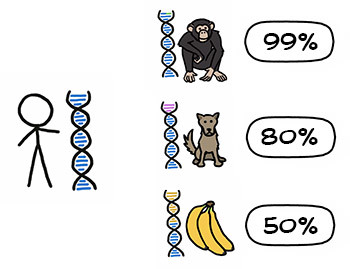 Here's normal human DNA, and here's the DNA of the monsters we're fighting. My God! it's only 0.2% different! Despite the fact that the monsters have unexplainable powers, and look, act, and think almost nothing like us, there's no real difference between us and them! Really makes you think who the real monsters are, doesn't it? A subtrope/sister trope of What Measure Is a Non-Human?.

There are a few problems with this:

In Real Life, it is true that we share some portion of our genome with many other species. Hell, humans have specific genes that are pretty much the exact same as plants. According to most scientific theories, this is because all organisms are descended from the same progenitor organism species, which also used DNA, the global genetic code. Some experts theorize that the first species may have used RNA, which was later used to code for DNA. The genes that were present in that original organism are still around, since they generally serve very important purposes in controlling different aspects of development, but those aspects that they control have been changed and co-opted into other pathways over time. So genes that function to pattern flower growth in some plants (determining which parts of a bud turn into petals, stamens, etc) are necessary for directing heart development in humans.

Further, DNA codes for chemicals, specifically proteins. Given that, and given that there are only so many ways to, say, break down a fat molecule into energy, it's hardly surprising that two wildly different animals, such as a mosquito and an elephant, would have large quantities of DNA (or rather, code for various chemicals needed for life) in common.

Keep in mind that when people who know something about genetics talk about differences or similarities within the same species, they may be ignoring the large percentage of genetic material they would by definition already have in common by being the same species.