Offscreen Moment of Awesome
aka: Missed Moment Of Awesome 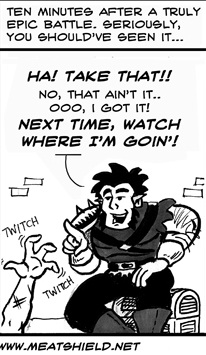 And you should have seen the popcorn we were eating watching this!
"And so our heroes defeat the muffin in an exciting battle, which we can't show you because it would be much too expensive for a cheap show like this."
— Narrator, Dave the Barbarian
Advertisement:

open/close all folders
Comic Strips
Podcasts
Sports
Theatre
Web Comics
Akiza: Wait, how did we get captured? I have a dragon<
Riddler: It was off-panel. Anything can happen off-panel.
Web Original
Web Video
Feedback

Blossom, Bubbles, and Buttercup's fifth riddle takes two minutes and forty-five seconds (which is the length of the commercial break) to solve, and when the viewers return from commercial, the girls are out of breath with the riddle completed.

Blossom, Bubbles, and Buttercup's fifth riddle takes two minutes and forty-five seconds (which is the length of the commercial break) to solve, and when the viewers return from commercial, the girls are out of breath with the riddle completed.