Off with His Head!
aka: Off With Her Head 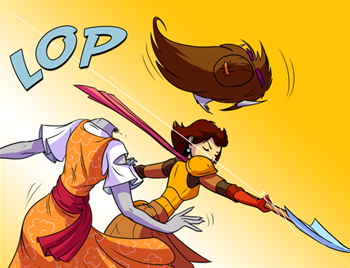 Well, that's one way to deal with a headache.
"You don't kill a man by mucking around with rifles, arrows, rocks or other long-distance rubbish. You kill him by grabbing the biggest bloody sword you can find, running up nice and close to him, and chop the dumb bastard's head off!"
— Team Fortress 2
Advertisement:

If you're dealing with any sword-oriented media, whether it be fantasy, medieval, kung fu, or something else, and it's more violent than a PG-13 rating, chances are, someone is going to get his head chopped off (and it may not even need the R rating if you're dealing with nonhuman enemies). One of the most common methods of execution back in the medieval era next to hanging, decapitation is usually one of the surest ways to ensure someone is Deader than Dead barring some very potent magic or divine intervention. Indeed, in Real Life, it is one of the very few ways that death can be instantly diagnosed (since it's impossible for humans to live without a head.)

Also see Alas, Poor Yorick, Decapitation Presentation and Severed Head Sports. When cutting off the head is the only way to kill something, it's Decapitation Required. If the severed head is somehow still alive after the fact for any notable length of time, that's Losing Your Head.

Not to be confused with Demanding Their Head, which is when a character is specifically requesting someone's head be brought to them for a bounty.

As per being a death trope, expect unmarked spoilers!