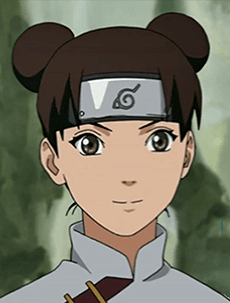 A particular hairstyle common to anime and manga heroines that involves styling one's hair into two buns worn at about 45-degree angles on the side of the head. This can make them look similar to Mickey Mouse ears depending on how simplified they're drawn. The buns themselves are often given cloth covers tied with ribbons.

It is particularly common with Anime Chinese Girls as it is a traditional Chinese hairstyle. Although in China, the style is called "ox horn" and it was gender neutral for children. In fact, the ox horns were a children's only hairstyle — it was completely inappropriate to continue wearing it into adulthood (which a lot of Japanese media does not seem to get). During childhood it was acceptable to cut the hair and wear it loose but after reaching adulthood, hair cutting was taboo and the hair would have to be fastened in some way. When a person in ancient China had their coming-of-age ceremony to represent their transition from child to adult, men would start to wear their hair in a topknot and women could wear all sorts of formal hairstyles (which varied throughout history).

There is also a less common variation of this style where the buns themselves have a triangular (or conical) shape, which can make someone look like a Cat Girl at first sight.

The style has spread into the real world among fans of the aforementioned heroines. Naoko Takeuchi used to wear her hair like Sailor Moon's before important exams during college, so she incorporated it into her heroine.

If the character isn't Chinese, expect them to be the really innocent, polite type, while the style with Twin Tails are mostly worn by Tsundere.

Does NOT count if the buns are over the character's ears. That's the Princess Leia. This style, with or without cloth covers, is different because it is used to signal maturity rather than cuteness. This is because the hairstyle covers the ears, and thus was seen as modest and chaste.

The style is named after the odango, a sweet dumpling eaten on a skewer as a Japanese snack, traditionally served at hanami (cherry blossom and flower viewing festivals.) Compare Devilish Hair Horns and Prim and Proper Bun. This style can be wildly over-exaggerated as Mega Twintails.