Now Which One Was That Voice? 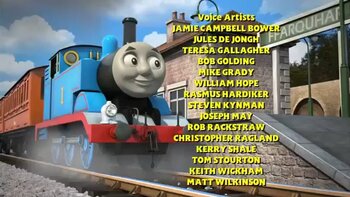 Common in Anime and Western Animation. Prior to the 1990s, this was the standard in Western Animation in the U.S. (other countries have different standards for this) where voice actors are lumped into a simple list under the heading "Voice Characterization", or something similar. This makes viewers who recognize an actor's name have to do a search to determine which character they were, which can be especially problematic if they used an alias for this production (or if someone has a very large vocal range).

In anime dubbing, this is generally a sign that the voice acting was not unionized for the production and at least one if not the majority of the voice talent are using aliases.

This is also prevalent in dubbed Anime and Video Games, but only for the dub cast. The credits list the Japanese voice actor in the standard Actor-Role method, while the English voice actors, by contrast, use the stock-standard "block of names." Many live-action dubbed films go farther note they're often released in theaters subtitled and don't list the English dub actors at all.

This trope is becoming less common as voice actors are slowly gaining more recognition and respect in and outside the industry.

There are three types of this...

Occurring typically with older anime English dubs and video games, in these instances the dub voice talent will not be mentioned in the credits at all. This is often a major sign that it's a non-union dub and thus a lower-budget production. Unfortunately, due to union issues (or lack there of), the chances of finding out any official info of the cast are close to none—especially if the majority of voice talent have little to no VA experience or it is an older production. Several games that constantly add new characters and content that requires voice acting (such as League of Legends) are often given this treatment for similar reasons. note SAG/AFTRA aren't often keen on video games where they add new characters/content that would require the voice actor to be hired and may sometimes re-do lines

In many cases, an official cast listing is made by the dubbing company/recording studio and sent to the game publishers, who publish it in the game credits at their own discretion.

All VAs involved in the production are listed, but the credits do not tell you which characters they voice. While it does lead to guesswork and deduction in order to figure out who voiced whom, at the very least it creates a good starting point to go off of. Both non-union and union productions perform this type of crediting, although non-union credits run the risk of including aliases and leaving certain names out. This was very commonplace in western animation during the '80s and '90s, but in recent years has fallen out of fashion in favour of more specific, film-like credits.

This type seems like an aversion at first, since all major characters have their actors properly credited. On the other hand, any recurring, special guest, or otherwise minor characters are either relegated to "Additional Voices" or not even credited at all. In a series, this may result in crediting main actors/characters that may not appear in a particular episode. Common in both union and non-union western animation and dubbed anime projects.

Not to be confused with when the Man of a Thousand Voices forgets which voice he used for a particular character.

This is a common practice in most anime series nowadays; Funimation tends to give the English voice cast precedence in the credits over the Japanese voice cast,note Early FUNimation dubs didn't credit the Japanese voice actors at all, as do Sentai Filmworks and did ADV Films back in the day.

Any Western cartoon made after the 90s. The 90s marked a transition period with a mix of this trope and proper credits.