Not Growing Up Sucks
aka: Cant Grow Up 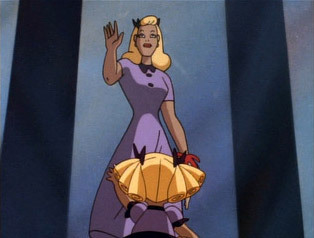 Sorry, Baby Doll, but you're stuck on this side of the mirror.
"I never should have done this to Ringley; he'd have been better off dying in his youth than spending eternity in it. It's had a damaging effect on him. He could be with my wife, but instead he is here, living out a cursed existence, dreaming of sunlight and an uninterrupted life."
— Ringley's dad, The Last Halloween
Advertisement:

Some (well, many) kids think Growing Up Sucks. Then there's this. It turns out Immortality Begins at Twenty is only true for a lucky few, because due to some form of Phlebotinum, this character is an adult but has the physical body of a child or early teenager. If still organic and biologically alive (that is, not a robot or vampire), they will never be mature enough to have a sex life. Even if they're physically mature enough to be capable of sex and mentally mature enough to give consent, most adults will still perceive them as children and steer clear. Thankfully, this doesn't come up often. Interestingly, their intellect will very likely keep growing throughout their lifetime, but their emotional maturity may or may not undergo a similar growth. They may still have their childlike optimism, or they may well develop a more mature mindset or even go beyond it. (And, either way, they may still have to go to school.) In any case, expect this thwarted love life to cause them a great deal of frustration if not outright Angst.

Oh, and in live-action television, there's one more thing to worry about. The actor who plays such a character is likely going to keep aging, so don't be surprised if the character is killed off before the actor begins puberty.

Common causes for not being able to grow up include but are not limited to: Being a robot, virtual copy, magically animated puppet, a god being cursed, an Undead Child, or various real-life medical conditions, usually hormonalnote In particularly disturbing examples, this may be a result of prepubescent castration. or genetic disorders that prohibit body growth and/or puberty.

May or may not overlap with Who Wants to Live Forever? and I Hate You, Vampire Dad. Sub-Trope of Blessed with Suck. Not to be confused with Not Allowed to Grow Up, which is about characters being forced to remain the same age via Executive Meddling, not any in-story reason. A subtrope of Never Grew Up.

Contrast Elderly Immortal and Born as an Adult.

Alternative Title(s): Cant Grow Up, Under Grown Up