Not Drawn to Scale
aka: Artists Are Not Architects 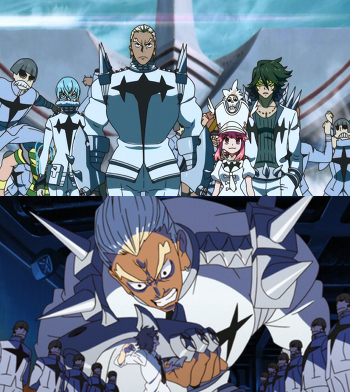 Ira Gamagoori only has one size: "Bigger than you."
Advertisement:

As a general rule, the depictions of the size, age, or other aspects of characters and objects in fiction are not particularly consistent. This is in large part due to the fact that people without the right training often have a difficult time scaling how large some objects are relative to others, and, considering how difficult it is to gain this kind of depth perception, it's somewhat understandable that many artists just do the best they can and don't do the research.

Clever writers will often recognize these limitations by deliberately avoiding clearly classifying character's traits like age, height, power, or minor biographical information — these technical features seldom relate directly to the narrative so they can often get away with it. Unfortunately, if someone else involved with the production wants to use these statistics for some other facet like merchandise, they can end up being defined inaccurately anyway. For some fans, this can turn into Serious Business.

Contradictions arising from the implications of this trope can get involved in pretty much any facet of fiction involving math, from Dawson Casting to bizarre tiers of superpowers. Sorting algorithm tropes can mitigate this to a large extent, as it avoids measuring anything objectively by instead only measuring things relative to other fictional objects. Even then, size and height are a consistent problem area, as most mundane objects do have general sizes, even if the writers forget this.

Your Size May Vary is a subtrope. Bizarrchitecture is what happens when an artist deliberately invokes this trope to create an eerie, otherworldly effect as opposed to an Off-Model one.

See also Sci-Fi Writers Have No Sense of Scale, for the omnishambles created when this trope interacts with the already-unfathomable distances involved in space travel.

Alternative Title(s): Artists Are Not Architects