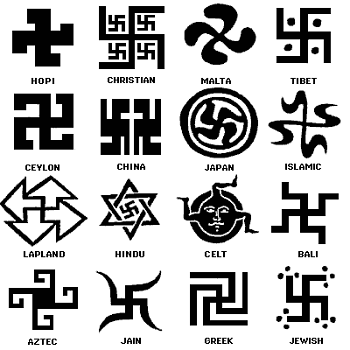 Wait a minute, a JEWISH swastika?!
"You idiot, this isn't a Nazi swastika. This is a Buddhist swastika."
— Kazemaru, Yu Yu Hakusho Abridged

The swastika is an ancient sun symbol, originating in Sanskrit, a writing system in use during The Buddha's lifetime, and used in many cultures throughout history.

If you see it in either an Asian-themed work, or one from the 1920s or earlier, the symbol has nothing to do with Nazi Germany.

The original swastika stands at a 90-degree angle instead of a 45-degree one, and its arms may point in either direction, whereas the arms of the Nazi swastika (which the Nazis actually called the Hakenkreuz—"hooked cross") always point clockwise. Usually, but far from always, there are lots of variants. See the Real Life examples below for more details.

Polar opposite of A Nazi by Any Other Name: This trope is about cases where the most famous symbol of Nazism actually doesn't have anything to do with Nazism.

Contrast No Swastikas, though even Non-Nazi Swastikas are liable to be censored. In no small part because neo-Nazis frequently try to dodge European laws against display of Nazi symbols by appropriating Non-Nazi Swastikas and anything else that looks even vaguely swastika-like.