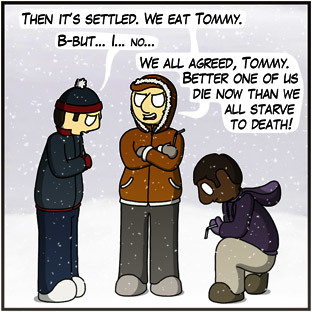 "In the frozen land of Nador, they were forced to eat Robin's minstrels. And there was much rejoicing."
— Narrator, Monty Python and the Holy Grail

We're out of food. Now what? That guy in the bucket hat is looking pretty tasty. Why don't we Just Eat Gilligan - literally?

This trope is the ugly side of exploration. The characters are out of food, and resort to cannibalism not because they like it, but because they have no other choice. It's that or starve to death.

Named for the famous example of the Donner Party,

who ate the bodies of their comrades who had died of hunger in order to survive the harsh winter of 1846-47.

Compare Eat the Dog, Reduced to Ratburgers, Too Desperate to Be Picky, and Cold Equation. Contrast I'm a Humanitarian, where the character eats their fellow human out of enjoyment. When animals or monsters eat their own kind, thus demonstrating they're ravenous and/or vicious, that's Monstrous Cannibalism.