No One Could Survive That!
aka: Nobody Could Have Survived That 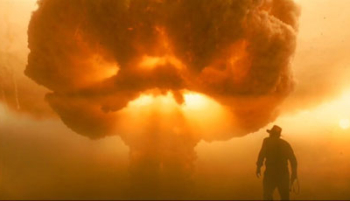 The fridge made it out, too.
Tonk Fah: You think he'll live?
Denth: He just fell out the third-story window, plummeting toward certain doom. Of course he'll live!
— Warbreaker

Almost universally uttered after a character (usually a hero but sometimes a villain) takes a wild leap into the unknown as a way to escape pursuit and otherwise-inevitable capture — jumping off a high cliff or across a wide chasm, for instance. The pursuers then give up the chase, confident that their quarry has effectively committed suicide, and never go look for the body to make sure.

Of course, the moment someone says this, they've guaranteed that the person in question not only has survived, but will be coming back to spoil someone's day.

If it happens towards the end of a story, expect a Finger-Twitching Revival... after they've been buried under a ton of bricks.

If the villain's hand reaches up and grabs your ankle from below the ton of bricks/edge of the cliff, that's... a trope of its own.

A frequent variation is "Nothing human could have survived that," which usually heralds or underscores the discovery that the "victim" is either non- or super-human.

Also may be a result of The Worf Barrage or an attempt at Try and Follow.

(This also frequently occurs with explosions and collapsing structures. When it's the hero caught in the explosion, it's possible that no one DID survive that if they weren't stalled by a Disney Death.)

Along with Nothing Can Stop Us Now! and What Could Possibly Go Wrong?, this is one of the things a Genre Savvy character should never ever ever say. In fact, they should Dope Slap anyone who does...

If the trope is overused with one character, it's a case of Why Won't You Die?

Not to be confused with Playing Possum, He's Just Hiding!, and No One Should Survive That.