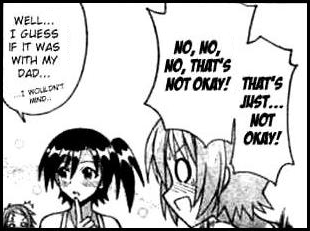 She's talking about kissing. Either that or Ako is vehemently opposed to family picnics.
"No, no, no, no, no, no, NO, NO, in an infinite expanse of NOs from the Dimension of NO with a statue dedicated to their great creator, the God of NO, who wept tears of NO that filled the oceans with NO and brought about billions of creatures who were NO!"
— Linkara, on Jaime hitting Brenda
Advertisement:

What a character says when something is wrong, stupid, or squicky enough.

The usage tends to be:

Alice: So the Big Bad sees a mouse and dies of a heart attack. The heroes spend the second hour of the movie talking about The Power of Friendship.
Bob: Are you making this up?
Alice: Wait, let me finish. And then this monkey princess Idol Singer and her 28 penguin back-up dancers show up.
Bob: No. Just… no.

Bob: [discovers that Rule 34 applies to Sesame Street] No. Just… no.

See also Flat "What", Dude, Not Funny!, Sick and Wrong, And That's Terrible. It can be followed, preceded or coupled with a Rapid-Fire "No!" or a Blunt "No".

Note: this trope is for In-Universe examples only. It is not to be potholed for anything tropers themselves find squicky or stupid.

Jon really found the implications to be too creepy to his liking.

We Have a Problem

Alternative Title(s): No Just No

Jon really found the implications to be too creepy to his liking.

We Have a Problem