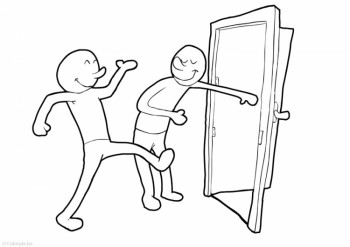 "There's nothing to hate about Marianne. She's little and friendly and she will lend you anything."
— Jenny, Nothing's Fair in Fifth Grade
Advertisement:

The Nice Guy (or Girl) is nice. Not that he'll necessarily be an All-Loving Hero, but he's definitely not unpleasant, obnoxious or an overly cynical Byronic Hero edgy rebel. These characters are kind, friendly, psychologically well-balanced, morally good and socially decent in most cases, and in short, someone anyone would genuinely like to be around and have as a friend, which is often what they are to the hero and/or his extended cast. He won't engage in jerk-like behavior, but probably responds in kind to Vitriolic Best Buds, and Beware the Nice Ones is still absolutely to be considered.

If done right, it can demonstrate why a guy has beautiful women attached to him: he really is a remarkably wonderful and compassionate person. The Nice Guy can be engaging, likable or The Protagonist; all it takes is giving them a personality outside of "nice" such as: a scholarly refinement, a chivalric attitude, some engaging relationships, and a pinch of Hidden Depths. Having the right actor with the thespian skill to take those character qualities and wield them with charm and sincerity can help, which is how master actors like Christopher Reeve and Chris Evans took archetypal Superhero paragons of pure goodness who superficially seemed bland and colorless, Superman and Captain America respectively, and made them compelling characters audiences loved.

Nor does it mean being nice means they're not tough, or an Iron Woobie. If combat intellect or combat ability are involved, it's akin to Obfuscating Stupidity or Crouching Moron, Hidden Badass because you naturally expect the dark, tormented loner to be rough and tough, and the nice guy to be a Non-Action Guy. So, when it comes time for "No more Mr. Nice Guy", heads roll. On the other hand, with the All of the Other Reindeer trope in play, the nice fellow can be a redeeming factor as a person whom the beleaguered hero realizes is on his side and who lets him know he's not alone. (That is, unless the nice guy is the beleaguered hero; then he's screwed.)

Another trait Nice Guys often exhibit is being Easily Impressed. Most people like to be complimented or appreciated, so writers will often give the Nice Guy low standards to give a mediocre or upset character a boost in morale. Unfortunately, doing this will often make them incredibly reckless or inflate their ego a bit too much.

If the Nice Guy has a rougher Jerk with a Heart of Gold male character as his Foil, they're a Noble Male, Roguish Male or Sensitive Guy and Manly Man duo.

Occasionally, however, the treatment goes the other way around: Perhaps in a world set upon Black-and-Gray Morality or Grey-and-Gray Morality, this Nice Guy actually stands out because he IS a Nice Guy. He doesn't have the excuse to be cynical or mean, nor does he need to have a tragic backstory. He's so nice, friendly and helpful... that he eventually becomes a fan-favorite due to how much he stands out amongst the more cynical cast members, like a refreshing breeze.

Usually, the result of Upbringing Makes the Hero. Though, watch out if you've pressed his Berserk Button. Exact oppositions of this trope are: Jerkass, Lack of Empathy, Jerk with a Heart of Jerk, and the Complete Monster (extreme opposition). If the villain is a Nice Guy in spite of his evil deeds, then he qualifies as Affably Evil.

Fortunately, this one trope has many Truth in Television examples. So many, in fact, that there's no need to list them here; thanks in advance.

Note: This trope refers to genuinely nice guys. If you're looking for the Internet definition of "Nice Guy," that's at Wants a Prize for Basic Decency, Entitled to Have You, Bitch in Sheep's Clothing, and some cases of Dogged Nice Guy.

On a D&D alignment chart, nice guys practically represent the Neutral Good alignment. Exceptions are if the guy is extremely respectful towards rules, if he's kinda undisciplined, or, in very rare cases, if he's polite and pleasant but actually amoral.