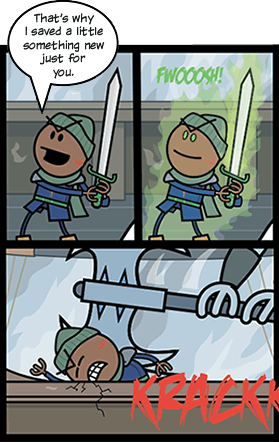 The hero is about to do something awesome, something that they will always be remembered for. The music is swelling, the tension is rising, and it appears to the viewer that awesomeness is about to grace their eyes.

So they stand alone against the Big Bad's army/prepares to jump through the skylight so as to crash The Omniscient Council of Vagueness' meeting/gets ready to open a can of whoop-ass after getting their ass handed to them/prepares to show The Dragon why they have a reputation for badassery.

But then they fall victim to a Zerg Rush/can't quite manage to break through the skylight/take a bullet to the brain before they can do anything/get steamrolled by the more powerful opponent.

It's The Day the Music Lied.

A Negated Moment of Awesome is when a character is about to get their Moment of Awesome, only for it to never come. The MOA in question ends up accomplishing nothing, making things worse, or, if the MOA was a hero apparently emerging victorious in battle, their enemy gets back up and just completely turns the tables back on them. Compare Hope Spot, Surprisingly Realistic Outcome, Kaizo Trap, Failed Attempt at Drama, and What Could Have Been. Contrast with Moment of Awesome and Offscreen Moment of Awesome. Is surprisingly common in Darker and Edgier works or even modern comedies poking fun at tropes and various cliches. Pretty much every Shoot the Shaggy Dog story ends like this. If the moment is negated by hindsight or turns out to be a bad thing in the long run, that's It Seemed Like a Good Idea at the Time and Nice Job Breaking It, Hero.

Anya is the last man standing on her dodgeball team and tries to take out the opposing team's best player. Her throw is framed like an epic attack... only for her to completely flub it and get eliminated right away.

Anya is the last man standing on her dodgeball team and tries to take out the opposing team's best player. Her throw is framed like an epic attack... only for her to completely flub it and get eliminated right away.